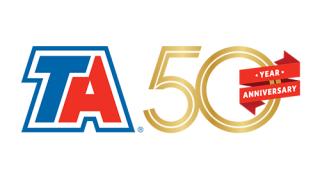 WESTLAKE, Ohio — TravelCenters of America Inc. (TA)continues to celebrate its 50th anniversary with an "outstanding" second quarter amidst what CEO Jonathan Pertchik called a challenging and dynamic environment.

"Strength, resilience, consistency, the ability to optimize opportunity and outperformance: my 18,000 teammates at TravelCenters of America have increasingly demonstrated these qualities in recent years," Pertchik said during the company's second quarter 2022 earnings call.

He pointed out that the latest quarter's earnings are being compared to 2021 growth that was already significantly above 2020, making TA's recent performance that much more impressive.

During the quarter, TA's net income improved 121 percent and adjusted EBITDA increased by 67 percent over the same time period in 2021. Fuel and non-fuel gross margins increased by 56 percent and 10 percent, respectively.

"TA has outperformed for another quarter on key financial measures reinforcing the resilience and strength of its business model," Pertchik said. "Operational highlights for the quarter included the fuel team successfully managing extraordinary volatility in supply markets, growth in truck service and the re-opening of some full-service restaurants.

"The company has proven once again that it can overcome challenging macro-economic circumstances while maximizing market opportunities through operational excellence and a resilient business model," he added.

Inside its stores, TA has been successful in "thoughtfully" increasing its prices to offset labor and operating costs pressures, according to Pertchik, while at the same time launching initiatives such as improving its customer loyalty program, food operations and merchandising through technology.

The company is also working with its food and convenience offerings to continue improving both top-line and bottom-line efficiencies, the chief executive noted.

Investing in growth remains a key pillar for TA's transformation. The company will focus on site refreshes, technology improvements and network expansion while continuing to evaluate opportunities to acquire high-quality travel centers.

It has also entered into 50 TravelCenters franchise agreements since the start of 2022, one of which began operations during the second quarter. TA expects to open 40 of these locations between now and the third quarter of 2024. Its goal is to open 30 such sites annually.

"While results benefitted from favorable fuel purchasing conditions created by extraordinary volatility, a continued focus on operational excellence and investing in growth were also instrumental in driving a very strong quarter once again," Pertchik said.

Westlake-based TravelCenters of America Inc. has more than 18,000 team members at 276-plus locations in 44 states and Canada, principally under the TA, Petro Stopping Centers and TA Express brands. TA operates more than 600 full-service and quick-service restaurants and nine proprietary brands, including Iron Skillet and Country Pride. Its specialized business unit, eTA, focuses on sustainable energy options for professional drivers and motorists, while leveraging alternative energy to support its own operations.