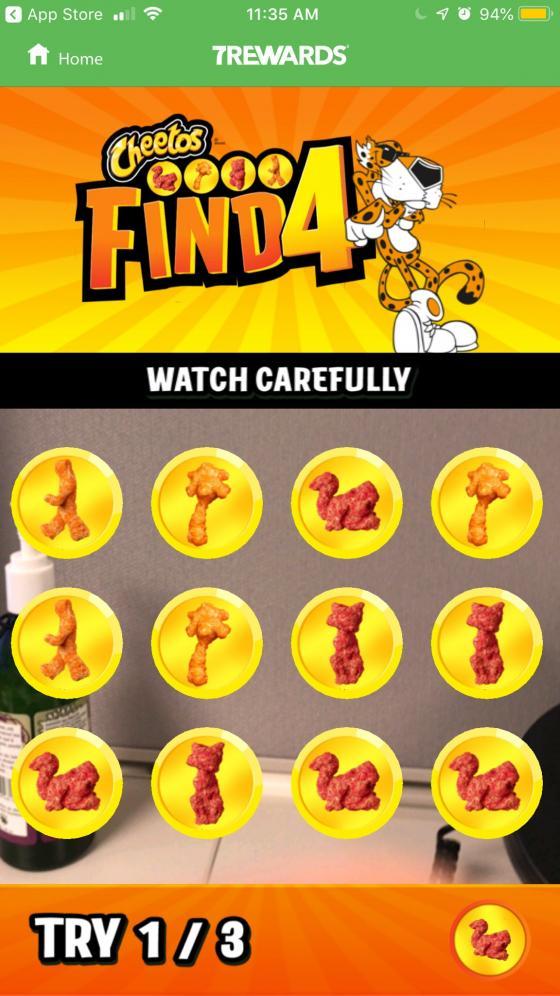 IRVING, Texas — 7-Eleven Inc. and PepsiCo's Frito-Lay Cheetos brand have come together to launch an augmented reality experience within the 7Rewards mobile app.

Using a smartphone's rear-facing camera, the experience superimposes 12 circular cards that briefly reveal a Cheetos puff before flipping over and shuffling in a user's environment. Users that select the four cards with the same-shaped Cheetos puff can win up to 40 7Rewards points, reported Convenience Store News sister publication Rise.

After playing the game, the experience gives users the option to "take a selfie with Chester," Cheeto's cheetah mascot. Using the phone's front-facing camera, the app overlays the mascot's glasses, ears and mouth onto a real-time image of a user's face and head to snap, save and share.

The in-app augmented reality experience indirectly tied into Cheetos' national "Mega Cheesy Ball" contest, which will award eight winners with $10,000.The contest, which ran April 21 through June 15, encouraged consumers to submit an image of a Cheeto puff matching the weekly Cheetos puff shape on cheetoscheesyball.com. Entrants could submit their own Cheeto piece or choose one of the available images of Cheetos puffs on the website.

Based in Irving, 7‑Eleven operates, franchises and/or licenses more than 68,000 stores in 17 countries, including 11,800 in North America.

Convenience Store News and Rise are properties of EnsembleIQ.