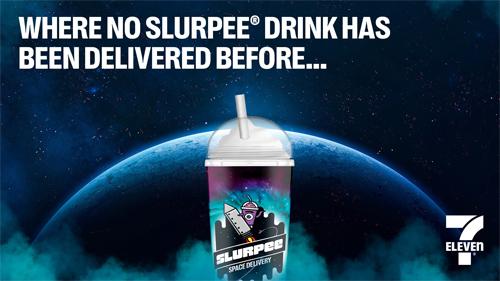 The frozen dispensed beverage will rocket out of Earth’s atmosphere in August on a private space flight commissioned by the convenience store retailer in honor of its 94th birthday.

"We're celebrating all things summer, Slurpee drinks and skateboarding during Brainfreeze SZN at 7-Eleven… Some would say we're reaching for the stars," said 7-Eleven Senior Vice President and Chief Marketing Officer Marissa Jarratt. "In the spirit of Taking it to Eleven for our birthday month, we're delivering our beloved Slurpee to space and bringing our customers along for the journey — after all, what is more far out than outer space?"

In order to determine which Slurpee flavor will be making its galactic debut, 7-Eleven will add up the total of all the Slurpee flavors ordered by customers through the end of July via 7-Eleven Delivery in the 7-Eleven app. The most popular choice will be sent to outer space.

Only a very few exclusive commemorative Slurpee cups depicting the galaxy will make the stratospheric trip. With each 7-Eleven Delivery order through the month of July, Slurpee fans enter themselves for a chance to win one of the exclusive cups as a "Slurpee in Space" memento after they land back on earth. Every order equals one entry.

Slurpee drinks will depart Earth from a 7-Eleven store in Michigan — the state that consumes the most Slurpee drinks — in August.