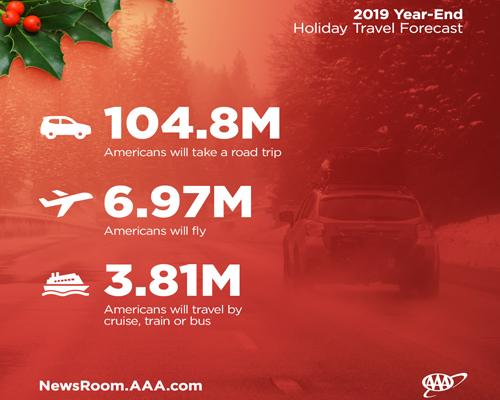 ORLANDO, Fla. — 'Tis the season to travel in record numbers.

According to AAA, 115.6 million Americans will travel this holiday season from Dec. 21 through Jan. 1. The number of holiday travelers is the most in nearly 20 years since AAA began tracking in 2000, and represents an increase of 3.9 percent over last year, or 4.3 million more people.

More than 104 million of those holiday travelers will drive to their destinations and, INRIX, a global transportation analytics company, expects delays to be the worst on Dec. 26, with afternoon delays reaching nearly double congestion-free drive times in major U.S. cities.

"Holiday cheer is at an all-time high this year, with unemployment at historically low levels, and noted improvements in both disposable income and household net worth," said Paula Twidale, vice president, AAA Travel. "Travelers should be getting used to crowded highways and airports, as this marks the eighth straight year of new record-high travel volumes for the year-end holidays."

Not everyone will be getting behind the wheel. Travelers will also take the sky, sea or let someone else do the driving. Specifically:

For the 104.8 million Americans traveling by automobile, INRIX, in collaboration with AAA, predicts only marginal delays throughout the holiday week. Nationally, drivers could experience double the travel times on Thursday and Friday afternoon, although New York City and Washington, D.C., could see triple the delays.

"With kids out of school and many Americans taking extended time off for the holidays, drivers will experience only incremental delays throughout the week. Although congestion will be lighter than normal, knowing when and where major delays will likely happen will help save time and reduce stress this holiday season," said Trevor Reed, a transportation analyst at INRIX.

For those hitting the highways, there is good news the pump. According to AAA, motorists can expect to see gas prices drop before the new year, but will likely be slightly more expensive than last December's national gas price average of $2.37.

As an added bonus for holiday road trippers, AAA members who register in the Fuel Rewards at Shell program through Dec. 31 can receive an additional 25 cents per gallon discount on their first fill up after registering as a new Fuel Rewards member, on top of the everyday 5-cent discount.