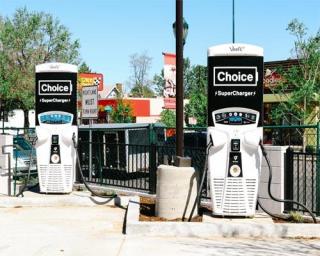 DENVER — Choice Market recently opened its third store in the Mile-High City. The location is its first to offer both gas pumps and electric vehicle chargers, and the first to feature its new digital user experience whereby customers can order via proprietary app for pickup or delivery.

Choice (its banner name) has undergone several tweaks since the flagship store opened in October 2017 in the heart of downtown Denver, across the street from the historic Brown Palace Hotel and occupying the ground floor of a high-rise apartment building.

At the third Choice store, which opened in August about a mile south of the flagship store (the second store opened a mile east of the flagship in October 2019), the idea is to create one, unified, omnichannel experience, according to Fogarty.

"That was always my vision with this concept five or six years ago, but you have to crawl before you can run," he explained. "Now, it’s coming to fruition and it is so cool to see. I think our customers will love it. Everything in-store will be deliverable."

A fourth Choice store is currently in the works in the Golden Triangle area of Denver, on the ground floor of the Parq on Speer apartment building. Expected to open in November or December, this location will feature frictionless technology, whereby customers can download an app, enter their payment information and scan the app to enter the store, and then just walk out when they’re done. Ceiling cameras and shelf sensors will determine what customers have selected to buy and, moments later, an e-receipt will appear on their phone.

Despite Choice's new digital focus, Fogarty still believe in the longevity of brick-and-mortar convenience stores, and the small operator has plans to keep expanding.

"One hundred percent. Brick and mortar will always have validity, there is no doubt in my mind. You hear about ghost this and that, and there is a place for that, but people are still living their lives; they’re still dropping kids off at soccer practice and walking around being real humans," he said. "To us, as an omnichannel player, brick and mortar is the hub. It maximizes our revenue per square foot and creates that brand affinity. I’m a huge proponent of physical retail space, particularly in convenience, because it’s all about proximity."

"The grocery side of business, specifically, has a scale. It’s very difficult to operate with one or two stores," said Fogarty. "For us to compete from a price perspective and drive the volume we need and reap efficiencies, we feel it's in our best interest to keep building, and that includes a commissary that will support all of it. It’s just a matter of when, where and how quickly."

Fogarty considers Choice a nationally relevant brand. "I think this is something that plays well in suburban Charlotte and downtown Los Angeles and everything in between," he stated. "I believe we can fulfill the needs of soccer moms who want high-quality, on-the-go meals for their kids, as well as millennials living and working in urban America."

As it expands beyond Denver, Choice will probably go west before it goes east, according to Fogarty. "Seattle, L.A., San Francisco, Austin — I see those types of cities as being similar to Denver and probably where we’ll head to first."