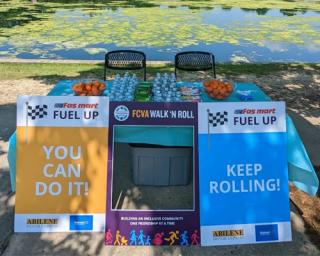 A total of 165 individuals attended the fundraising event, which encourages participants to walk, roll, run, scooter, or skate to raise money for the Friendship Circle of Virginia. As the main event sponsor, GPM provided "Fuel Up" stations offering drinks and snacks to participants.

Additionally, the company supported the debut "Friendship Fair" that featured pony rides, inflatables, a petting zoo, and other exciting activities and treats for families to enjoy.

Friendship Circle of Virginia is a nonprofit organization that aims to create an inclusive community by facilitating friendships and social opportunities for people with and without disabilities to connect through meaningful social experiences at home and throughout the community.

"We truly enjoy supporting local organizations, and the Walk N' Roll event stands out for its unifying qualities, bringing joy and community to families in Richmond," said Michael Bloom, executive vice president and chief marketing and merchandising officer at GPM Investments. "We're proud to support the Friendship Circle of Virginia and look forward to more opportunities to partner in the future."

In honor of World Wish Day, Keebler celebrated a donation milestone of more than $1 million during its three-year partnership with Make-A-Wish that has helped bring joy and a little Elfin magic to more than 100 children with critical illnesses.

The donation was made possible with the help of consumers who purchased cookies, providing hope to children and their families, including: 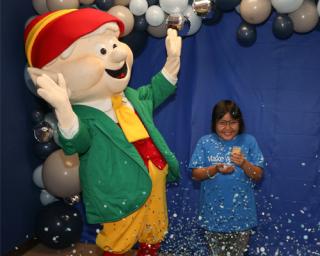 "Enhancing everyday moments through magic has always been at the heart of the Keebler brand. We are thrilled to celebrate Make-A-Wish and help grant wishes for children battling critical illnesses across the nation," said Taylor Exline, brand manager of Keebler. "Knowing we helped put smiles on the faces of kids and families who are going through a rough time. That's the real Elfin magic."

In honor of the partnership for 2022, Keebler debuted a limited-edition Fudge Stripes Celebration Cake Cookie featuring a magical star-shaped center and Keebler's iconic stripes in the signature blue of Make-A-Wish. With each purchase, consumers triggered a 25-cent donation, up to $250,0000, to Make-A-Wish.

Kum & Go partnered with Please Pass The Love and will share this spring’s "Stick By Me" suicide prevention initiative within its 400-plus stores serving communities across 11 states.

The stickers, featuring crisis lifelines and resources via phone number and a QR code, are being shared with students and educators at more than 1,000 schools across Iowa for no cost through Please Pass The Love. Kum & Go has committed to display the stickers in all of their stores’ restroom stalls across their footprint.

"I'm not shy in talking about my own mental health journey," Kum & Go Chief Executive Officer Tanner Krause said. "These past few years have brought a tremendous amount of stress and pressure on all of us. I'm proud to say I've sought out my own mental health resources that have provided me valuable guidance on how to live my life.

"Kum & Go is committed to making days better for our community. If the Stick By Me project with Kum & Go inspires just one person to seek the resources to allow them to start living a healthier, happier life, then we will be quite proud of our work with Please Pass the Love," he continued.

"Stick By Me" was launched in February 2022 as an urgent community response to numerous suicides of young Des Moines, Iowa-area students. Please Pass The Love used its leading role in Iowa as an education-focused advocacy organization to provide suicide prevention resources to educators and students of all ages by sharing crisis information and encouraging them to talk about their mental health and well-being. 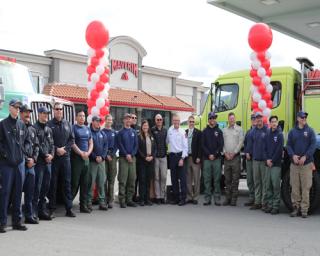 Coinciding with Wildfire Awareness Month, the partnership is rolling out a "Spark Safety, Not Wildfires" message throughout nearly 400 Maverik locations across 12 western states. The campaign's aim is to provide simple, yet effective tools for public lands users, which they'll see as they stop to fuel up for the next adventure. Creative videos will play on Maverik’s fuel pumps and TV screens inside the store as well as on various social media channels. Those purchasing a firewood bundle will also receive a set of campfire safety tips included.

Over the next three years, the Spark Safety, Not Wildfires partnership will focus on the most frequent human-caused wildfire ignitions and how they can be prevented, with the overall goal of reducing these costly disasters. We can prevent these catastrophic incidents if we all just take time for some simple measures before recreating, such as checking trailer chains, avoiding dry grass, and choosing a suitable target shooting location.

Maverik also helped people affected by the Ukraine crisis via raising nearly $764,000 as part of its five-week "Round Up Your Change" register donation program to benefit the global Red Cross network. Customers and team members rounded up their cash and credit transactions to the nearest dollar at Maverik stores across 12 states raising nearly $414,000, while the convenience retailer offered an initial donation of $50,000 and matched the Round Up contribution by $300,000.

"Maverik is grateful for the opportunity to provide a platform for people to come together in solidarity and hopes the total gift will help support the millions of people whose lives have been forever changed," said Maggelet.

One hundred percent of Maverik's initial donation and the funds raised from the "Round Up" program will go toward the global Red Cross effort to provide humanitarian aid to people affected by the crisis in Ukraine. The Red Cross is committed to providing lifesaving aid to those in need and is currently on the ground distributing food, delivering medicine and medical supplies, assisting with evacuations, and providing shelter. 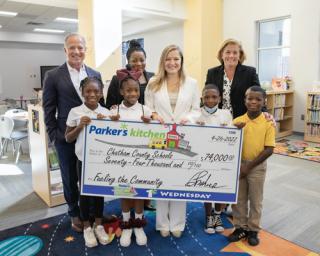 Parker's is also donating approximately $275,000 to public and private schools in Georgia and South Carolina this spring and has given more than $1.8 million to area schools since the inception of the Fueling the Community program in 2011. The program is a longstanding charitable initiative that donates a portion of every gallon of gas sold on the first Wednesday of each month to area schools in coastal Georgia and South Carolina.

"At Parker's, we have a powerful commitment to the Savannah community and are incredibly proud to be headquartered in America's most beautiful city," said Greg Parker, founder and CEO of Parker's. "Education is vital to the overall success of our community, so we consider this donation to be an investment in Savannah's future leaders and a symbol of our ongoing support for the dedicated teachers in the Savannah-Chatham County Public School System."

Parker's also donated $56,000 to the Beaufort County School District as part of the company's Fueling the Community program.

An American flag, first flown by the U.S. military in combat, began its more than 10,000-mile Rolling Remembrance relay to help raise awareness of, and funds for, Children of Fallen Patriots Foundation, an organization that provides college scholarships and educational counseling to children who have lost a parent in the line of duty.

This is the seventh year that PepsiCo has honored the military heroes who lost their lives while serving the United States through this program. Thirty-six PepsiCo drivers, who happen to be military veterans themselves, transported the American flag across the country, handing it off to one another at relay points from Seattle to New York.

"Each leg of this journey has meaning, to the driver, the community and the families of fallen patriots that Rolling Remembrance honors," said Jim Farrell, senior vice president of operations, PepsiCo Beverages North America Central Division and executive sponsor of PepsiCo Valor employee resource group. "By honoring the sacrifices of these military heroes, supporting their families through Children of Fallen Patriots Foundation, and recognizing our own military veterans at PepsiCo, we celebrate the important role of veterans in our country and in our company."

Approximately 25,000 children have lost a parent in military service over the last 35 years. Through scholarships and educational counseling, Children of Fallen Patriots Foundation helps to bridge the average $25,000 gap between government assistance programs and the cost of a four-year degree that scholars face. 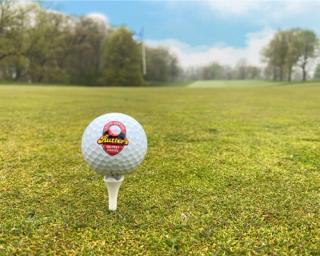 This year, the event took place at the Country Club of York, located in York, Pa., and included the participation of over 140 different vendors, suppliers, and partners. Funds raised from the charity outing will help support various Rutter's Children's Charities giving programs and initiatives throughout 2022.

The annual two-day golf event started in 2003 and has helped Rutter's and Rutter's Children’s Charities raise more than $10 million to support local children's charities in Pennsylvania, Maryland and West Virginia over the past 20 years. 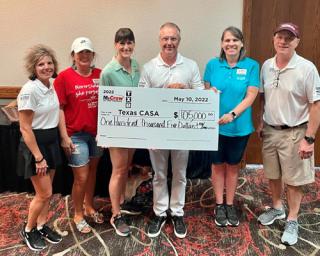 TXB has donated more than $682,000 to the child protection nonprofit since 2008 to support the local Texas communities which it serves.

In honor of the annual holiday, Van's Kitchen is donating a portion of its egg roll proceeds during June to No Kid Hungry and offering promotional materials for retail clients and activities to celebrate cultural foods and diversity.

Van's Kitchen established National Egg Roll Day in 2019 to honor the company's founding in June of 1986. Van and Kim Nguyen immigrated from Vietnam and made their ultimate American dream come true by starting a business from the ground up and providing opportunities for people from all backgrounds and walks of life to fulfill their dreams. Today, Van and Kim Nguyen's legacy continues through their daughter and Van's Kitchen's second-generation CEO, Theresa Motter.

"Thirty-six years ago, my parents took a leap of faith by building their own business from the ground up in a new country. Now, we celebrate their hard work and dedication not only on National Egg Roll Day but every day," said Motter, CEO of Van's Kitchen. "At Van's Kitchen, we believe that there is room at the table for everyone, whether it be the dinner table or the table of opportunity and are committed to providing delicious artisan egg rolls to our consumers across the country."