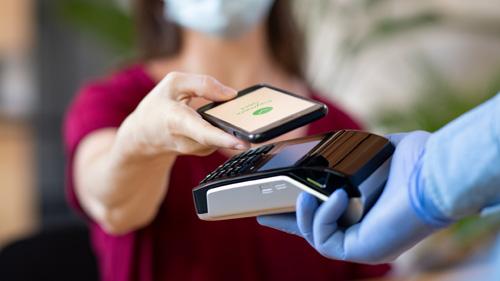 WASHINGTON, D.C. — In a bid to keep safe and healthy during the novel coronavirus crisis, consumers' shifting behaviors include how they pay at retail.

New research by the National Retail Federation (NRF) and Forrester shows the of use of mobile payments and contactless credit or debit cards increased in the past few months as the United States grappled with the COVID-19 pandemic.

"Health experts say there is no clear evidence that COVID-19 is transmitted by cash or credit cards but retailers are putting health and safety first and have rolled out a variety of no-touch payment options in order to err on the side of caution," said Leon Buck, NRF vice president for government relations, banking and financial services.

"While mobile payments and contactless cards have accounted for a minority of payments in the past, the pandemic has clearly driven consumers to change their behavior and retailers to accelerate their adoption of the technology," he added.

According to Buck, touchless less payment methods are important to keeping retail associates and consumers healthy, but they also raise concerns about security and retailer transaction fees.

"Retailers, banks and card companies need to work together to ensure that these transactions remain secure," he said. "And the card industry should not take advantage of this situation to rake in extra fees merchants would not pay otherwise. Card processing fees already drive up costs for retailers by far too much and ultimately increase prices paid by consumers."

The State of Retail Payments study, conducted for NRF every other year by Forrester, found 67 percent of retailers surveyed now accept some form of no-touch payment. That includes 58 percent that accept contactless cards that can be waved past a card reader or tapped on the reader, up from 40 percent last year, and 56 percent that take digital wallet payments on mobile phones, up from 44 percent.

Many retailers also allow customers to pay online or over the phone and then pick up merchandise in-store or at curbside, avoiding the need to touch card readers, sign for transactions or enter a PIN, according to NRF.

The joint research also found that:

In addition, among U.S. consumers, 19 percent surveyed via Forrester Consumer Technographics said they made a digital payment in a store for the first time in May. Of those, 62 percent used their phone and 56 percent used a contactless card. Sixty-seven percent said they were satisfied with the experience, while 57 percent would likely continue once the pandemic has subsided.

According to the joint research, the top concerns of retailers that accept no-touch payments include:

Banks charge merchants a fee averaging about 2.5 percent when a credit card is used to make a purchase in-person, and the fee is the same regardless of whether the card is inserted, tapped/waved, or used via a mobile device. However, a higher fee of about 2.8 percent is charged if the same card is used online or over the phone.

With the increase in purchases paid for that way but picked up in-store, retailers are expected to pay about $1.6 billion more this year, according to payments analysis firm CMSPI.

"Curbside pickup and buy online, pick up in-store transactions are treated as 'card not present' online transactions by the processors, so retailers are paying an online rate even when these purchases are picked up at the store," Forrester Senior Analyst Lily Varon said. "Retailers feel these are really in-store transactions so there's some pain there."

No-touch debit card transactions are also costing retailers more because the transactions often have to be processed over networks run by Visa and MasterCard when a PIN isn't used. CMSPI estimates retailers could save $2 billion a year if more banks that issue the cards turned on PIN-less capability and the transactions could be routed over the lower-cost ATM networks available when a PIN is used, according to NRF.