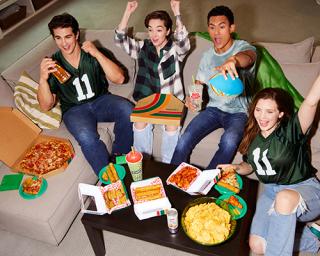 LOS ANGELES — Convenience store retailers and suppliers alike are gearing up for Super LVI on Sunday, Feb. 13, at SoFi Stadium. Here is a look at some of the latest news, stats and marketing efforts around the Big Game:

7-Eleven hopes to score a touchdown by offering customers one large 7-Meat, Cheese or Pepperoni pizza for free when they order through the 7NOW delivery app on Feb. 13.

"Watching the biggest football game of the year with friends and family has transformed into one of the biggest pizza delivery days of the year. While other brands offer customers discounts on their pizza, 7-Eleven is taking it one step further by rewarding customers with a free pizza," said Raj Kapoor, senior vice president of fresh food and proprietary beverages. "No matter which team you are cheering for, nothing brings people together like a mouthwatering pizza. Throw in a case of beer or seltzer, pints of 7-Select ice cream and a bag of chips to your 7NOW cart and you'll be set with gameday essentials!"

Frito-Lay released its fifth-annual U.S. Snack Index, which found that almost all adults (94 percent) agree that snacks have the ability to create enjoyable moments.

"The Super Bowl is not just about football, it's about gathering to make happy memories with friends and family," said Mike Del Pozzo, senior vice president of sales and chief customer officer for PepsiCo Foods North America. "This year, the snack table will feature Cheetos Flamin' Hot, Doritos Spicy Sweet Chili and Doritos Flamin' Hot Cool Ranch because more than eight out of 10 Americans will be enjoying spicy snacks."

This year's Snack Index also found that 84 percent of adults are looking forward to Super Bowl commercials that have a nostalgic feel to them. Hence, the Lay's brand will offer a journey down memory lane with a new campaign that reminds people to "Stay Golden" throughout life's moments.

Lil Dicky, a rapper, comedian and star of FXX’s show "Dave," is teaming up with delivery company Gopuff to present entertainment faster during the Big Game with the first-ever "Gopuff Quartertime Show" on Twitter and his YouTube channel.

The show's promotional video, which features Cardi B and her signature Whipshots vodka-infused whipped cream, teases a one-of-a-kind music spectacle that will stream between the first and second quarters of the Super Bowl.

How will you celebrate the Super Bowl this year, if at all?

Which aspect of the Super Bowl are you most interested in?

Where will you do your food shopping for the Super Bowl this year?

How will your spending on your anticipated food purchases for this Super Bowl compare to last year?

"A few of the categories that you might see advertised during the Big Game have seen percent increases in their sales over the past year. Beer sales are up 4 percent year over year, candy sales are up 8 percent, salty snacks 5 percent, and soft drinks 5 percent," said Lance Brothers, chief revenue officer at NCSolutions. "With nearly 20 percent of Americans indicating they’re actually planning to tune into the Super Bowl just for the advertising, this creates a significant opportunity for consumer packaged goods advertisers to reach eager consumers when they are open to and welcoming ads."

Although food and football are always major draws, companies shouldn't forget about the commercials. Plenty of new campaigns will be launched, according to Convenience Store News sister publication Path to Purchase IQ.

Anheuser-Busch's Michelob Ultra brand released a series of three Super Bowl commercials that harken back to the brand's "It's Only Worth It If You Enjoy It" belief and leverage the star power of major athletes, including tennis icon Serena Williams, former NFL quarterback Peyton Manning and soccer star Alex Morgan, among others.

Molson Coors' Miller Lite brand is tapping into the metaverse for its Super Bowl efforts this year, partnering with metaverse company Decentraland to bring a virtual bar to patrons during the game.

PepsiCo, in addition to its Super Bowl halftime show sponsorship, is teaming up with Verizon this year to introduce the "Pepsi Super Bowl Halftime Show Ultra Pass powered by Verizon 5G Ultra Wideband." The collaboration will offer an immersive, mobile experience that will run in tandem with the 12-minute halftime show.