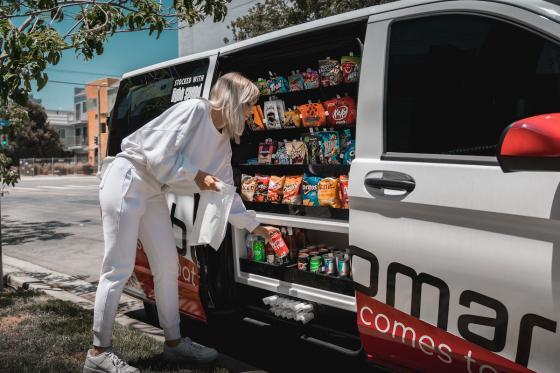 SANTA MONICA, Calif. — After piloting its on-demand mini-mart in West Hollywood, Robomart made its official debut in the area.

The Santa Monica-based company hails itself as the first store-hailing platform, as reported by Progressive Grocer, a sister publication of Convenience Store News.

Using the proprietary Robomart app, consumers can hail the store on wheels and have it arrive at their location in less than 10 minutes, making it the fastest delivery service currently available, according to the company.

For the West Hollywood launch, Robomart partnered with Miami-based REEF, an operator of mobility and logistics hubs and neighborhood kitchens in North America, to manage product stocking, tagging, scanning, integrity and replenishment.

"We're incredibly excited to launch Robomart in West Hollywood and introduce consumers to the latest innovation in retail," said Ali Ahmed, co-founder of Robomart. "In the past decade, online delivery services have grown substantially and filled a need in the market; however, there are still many challenges that make these services undesirable for consumers.

"With Robomart, we're disrupting the industry and have received incredible feedback from consumers on how this is the most convenient way to shop — delivering the fastest and most seamless shopping experience — which other delivery services simply can't offer," Ahmed added.

Initially, the company is rolling out two Robomart types: a Pharmacy Robomart and a ready-to-eat Snacks Robomart. It is developing a Grocery Robomart and plans to expand its fleet to include Pantry, Deli and Café Robomarts in the next few months.