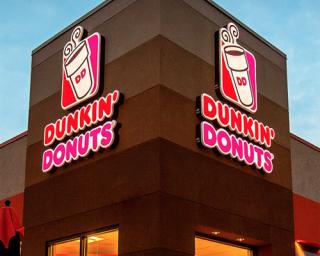 In order to achieve these targets, Dunkin' Brands intends to position its core Dunkin' Donuts U.S. brand to compete even more effectively in the coffee and beverage segment, driving profitable sales growth and further expanding westward across the country, according to the company.

Dunkin' Brands plans to add approximately 1,000 net new locations in the United States by the end of 2020, with more than 90 percent built outside the Northeast. Additionally, it plans to eventually have more than 18,000 Dunkin' Donuts restaurants in the U.S.

"Since our initial public offering in July 2011, Dunkin' Brands systemwide sales have grown by greater than 40 percent and total global points of distribution have grown by more than 4,100 units. In that time, we have also returned $2 billion in capital to shareholders through share repurchases and dividends," said Nigel Travis, Dunkin' Brands chairman and CEO. "We are proud of these accomplishments but also realize that if we are to compete even more effectively within the coffee and breakfast segment, we must make further progress against the execution of our multi-year Blueprint for Growth plan, which is designed to transform Dunkin' Donuts U.S. into the most-loved beverage-led, on-the-go brand.

"The continued execution of our Blueprint combined with our key value drivers — a tremendous asset-light model with low capital intensity; a history of returning capital to shareholders; and an ability to significantly expand our Dunkin' Donuts U.S. footprint — should fuel strong growth and shareholder value creation for Dunkin' Brands for many years to come," he added.

Dunkin' is particularly focused on maintaining and increasing Dunkin' Donuts U.S. share of the morning daypart before 11 a.m., which accounts for approximately 60 percent of its systemwide sales. It also seeks to unlock afternoon growth opportunities through menu innovation and national value offers. In 2017, the morning sales performance for Dunkin' Donuts U.S. was positive year-over-year and increased sequentially each quarter of 2017, according to officials.

Initiatives to improve Dunkin's convenience include:

Dunkin' is also committed to growing accessibility to its brand outside of its restaurants, and has expanded its Dunkin' Donuts-branded consumer packaged goods business from approximately $400 million in retail sales in 2014 to nearly $900 million by the end of 2017.

"Dunkin' Donuts U.S. is well on its way to becoming America's most-loved beverage-led, on-the-go brand. Our Blueprint for Growth, which is rooted in extensive consumer research, is focused on five main areas that we believe will collectively grow top- and bottom-line franchisee profitability: menu innovation; unparalleled convenience driven by digital leadership; broad accessibility to our brand through restaurant growth and new channels for our branded packaged goods; restaurant excellence; and brand evolution," said David Hoffmann, president of Dunkin' Donuts U.S.

"Very importantly, collaboration with our franchisees has never been stronger. Together with them, we are laser-focused on bringing about transformative change at Dunkin' that both builds on our heritage yet also updates our offerings and in-store experience to keep our brand modern, relevant, and positioned for long-term growth," he noted.