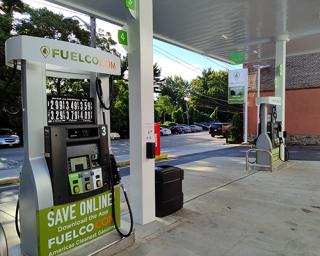 THORNWOOD, N.Y. — Capturing consumer attention is one of the biggest challenges facing service station owners, so Fuelco president Adam Musa began promoting the company's phone-app gas prices as a solution to the national conversation about inflation and rising gasoline prices.

The competitive gas pricing — which the company said produced lines at Fuelco's two stations in Valhalla and Yonkers — pushed consumers to download Fuelco's app to receive the discounted price of $3.89 per gallon of regular unleaded gasoline.

"Competitive pricing leads to increased volume, not only in terms of gasoline, but more importantly the number of customers entering the store, using our app and returning in the future. This is what builds brand awareness when you are trying to launch a new brand," said Musa.

"Customers remember who was there for them," said Musa. "We're the people's gas station."

"Advertising is the traditional method for motivating consumers to pay attention to your app. We took a different route. By timing our promotion to current events, we leveraged public outrage to maneuver our app into the news sphere," said Musa.

The gas sale delivered hundreds of app downloads. Since launching in the spring of 2020, Fuelco has had more than 20,000 downloads of its app, which the company uses to promote special offers like 99-cent frozen yogurt, $3.29 gallons of milk and free coffee for all app users.

Paired with its Foodsmart convenience store, the Fuelco service station combines deeply discounted gasoline and a variety of organic, gluten-free and fair-trade snacks, along with convenience store staples.

This is not the first unique approach Musa has taken. As Convenience Store News reported in March, he had a plan to establish creative loss-leader programs that inspire customer loyalty.

"Loss leaders help to raise awareness about your store, and they give people a reason to come in," Musa said while sharing his tips for building c-store sales in 2022. At his company's Foodsmart stores, frozen yogurt often sells for 99 cents for any size. "Even though both small and large frozen yogurts are 99 cents, many of our customers are health conscious and they buy the small portions."

Foodsmart stores also sell any-size coffee for 99 cents, a price that was prompted by the success of another c-store chain.

"We were inspired by 7-Eleven's Bring Your Own Cup Slurpee promotion," Musa said.

Thornwood-based Fuelco launched in 2020 and currently operates two locations in Valhalla and Yonkers, N.Y. New Fuelco/Foodsmart sites are expected to come to Westchester, Putnam and Fairfield counties by the end of 2022.