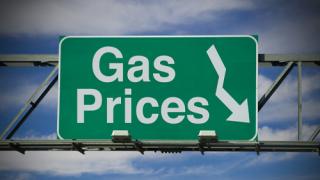 Meanwhile, the cost of oil has edged lower on fears of economic slowdowns elsewhere around the globe. Because of these factors, the national average for a gallon of gas fell to $4.05, AAA reported.

"Oil is the primary ingredient in gasoline, so less expensive oil is helpful in taming pump prices," said Andrew Gross, AAA spokesperson. "Couple that with fewer drivers fueling up, and you have a recipe for gas prices to keep easing. It's possible that the national average will fall below $4 this week." 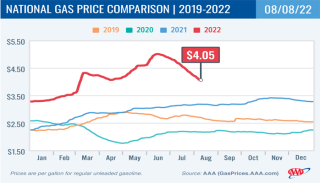 At the close of the formal trading session on Aug. 5, West Texas Intermediate increased by 47 cents to settle at $89.01. Although crude prices made slight gains on due to a strong U.S. jobs report for July, they saw significant declines throughout the week as a result of continuing market concern that demand will decline if economic growth stalls or reverses course, AAA reported.

For this week, crude prices could continue to decline if demand concerns persist.

In March, AAA conducted a survey examining the pump prices Americans would view as too expensive. At that time, more than half (59 percent) of respondents said they would change their driving habits or lifestyle if the cost of gas rose to $4 per gallon. If gas were to reach $5, which it did in June, three-quarters said they would need to adjust their lifestyle to offset the spike at the pump.