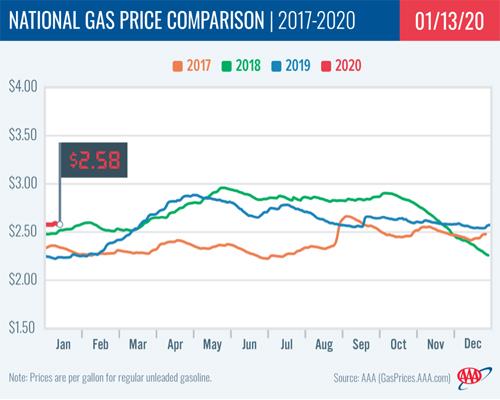 ORLANDO, Fla. — Despite crude oil price fluctuation and growing geopolitical concerns, the national gas average has held steady at $2.58 since the beginning of the year.

Today's national average is 2 cents more than last month and 34 cents more expensive than the beginning of 2019.

"A healthy and growing level of domestic gasoline stocks alongside decreasing demand are two factors helping to minimize gas price fluctuations," said Jeanette Casselano, AAA spokesperson. "In the last week, about 32 states saw pump prices push less expensive by just a penny or two or saw no change at all."

Broken down by region, fuel prices look like this:

The Great Lakes and Central States are seeing typical regional gas price volatility. Four states land on the top 10 list for largest weekly changes, all with pump price jumps: Michigan, Minnesota, Ohio and Indiana. While not on the top 10 least expensive list, Kentucky ($2.38) and West Virginia ($2.57) had the largest pump price decreases on the week in the region, with 3-cent drops.

Motorists in the region are paying 31 to 55 cents more to fill-up compared to this time last year. Illinois (up 56 cents) and Ohio (up 55 cents) carry the largest year-over-year difference in the country and region.

Drivers in the South and Southeast are paying less to fill-up on the week, with Florida seeing the largest decrease followed by Tennessee. All other states saw prices drop by a few cents or hold steady. Regional gas price averages range from as cheap as $2.26 in Oklahoma to as expensive as $2.48 in the sunshine state.

On the week, Delaware has the largest decline of any state average in the region and the nation. All states in the Mid-Atlantic and Northeast region saw gas prices decrease or hold steady with the exception of Rhode Island (up 1 cent) and Massachusetts (up 1 cent).