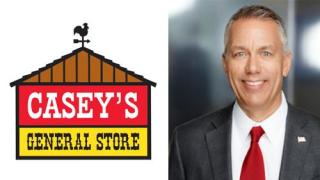 “A global pandemic wasn’t in the plan,” Rebelez told Convenience Store News in an exclusive interview discussing the takeaways and highlights of his first year at the helm. The impact of COVID-19 restrictions starting in mid-March caused a decline in guest traffic and a compression of same-store sales. Fuel volume and prepared food and fountain sales were especially impacted by the pandemic.

Casey’s started its fiscal 2020 fourth quarter with strong momentum as many of its strategic initiatives — including accelerating the three-year strategic plan unveiled at the company’s 2020 Investor Day — were gaining traction. Inside same-store sales were up in the mid-single digits, and same-store fuel gallons sold were up in the low-single digits during the first two weeks of March. Then, nationwide shutdowns due to the coronavirus hit.

Nevertheless, Rebelez describes his first year as a “great year.”

“It’s been challenging, particularly the last 90 days,” he acknowledged, but noted that his outlook is positive. “My perspective is that things are going really well for Casey’s.”

To highlight that, he pointed out that the retailer’s earnings per share were up 29 percent during the year, EBITDA was up 15 percent, and debt to EBITDA was at a 2.1x ratio. “Our balance sheet is in great shape,” Rebelez added.

One of the things he’s most proud of is how the Casey’s team has pulled together to build out its strategic plan. Key strategic initiatives are to reinvent the guest experience, create capacity through efficiencies, and accelerate unit growth.

“Despite the pandemic, we took a fresh look at our plan and we’re now even more bullish about it — so much so that we’ve actually accelerated a few of the tactics we had planned to do at a later time,” he shared.

For example, in the last six months, Casey’s made significant strides by investing in “world-class” talent from both within and outside the convenience store industry. In an effort to accelerate its evolution into digital, the company recently created the new role of chief information officer, hiring Adrian Butler to lead all information technology strategy, innovation, modernization and delivery. Butler, who reports directly to Rebelez, brings more than 20 years of experience in information technology leadership with such companies as IHOP and Target.

Rebelez told CSNews that another recent new hire will help the retailer take a fresh look at foodservice. Michelle Wickham joined the company in April as vice president of foodservice. With more than 30 years of restaurant experience with such companies as Red Robin, Qdoba Mexican Eats, Seattle’s Best and Yum! Brands, Wickham will lead the evolution of Casey’s $1.1-billion prepared foodservice business. The goal is a Casey’s Food 2.0, a more robust prepared food offering anchored by the chain’s hyper-successful pizza program, according to the chief executive.

“Pizza is a considerable foundation to build from,” said Rebelez, who cited menu development, rationalization, and creating a more culinary pipeline of innovative offerings as immediate goals.

As far as meeting goals is concerned, Casey’s opened 60 stores this past fiscal year and acquired an additional 18 units. In the digital space, it launched the Casey’s Rewards program in January and quickly acquired 2 million loyalty members in a matter of weeks. “We’ve also made great strides with our fuel operations, price optimization, fuel procurement, and navigating through this crisis,” Rebelez said.

Another initiative that was accelerated due to the pandemic is home delivery. Casey’s had already entered into a small pilot with DoorDash, but once the pandemic hit, the retailer quickly pivoted and rolled out the program to 600 stores within a couple of weeks. The offering was also expanded quickly.

“We always were planning to add SKUs available for online ordering and delivery, but we’ve accelerated that rollout so that a couple of hundred SKUs are now available for home delivery,” he explained.

The implementation of contactless delivery was accelerated as well, and curbside pickup, which “was not even on our roadmap” prior to the pandemic, is now in the final stages of a pilot program.