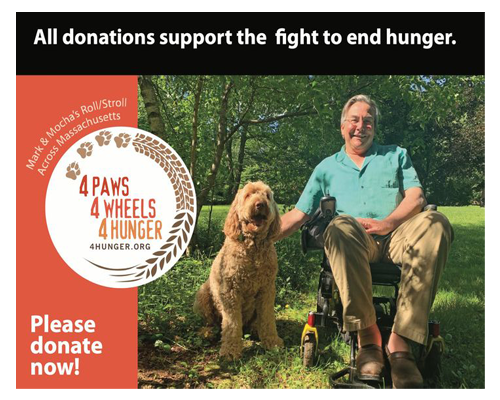 Mark Roberts, who headed out in his electric wheelchair on Sept. 18, and his 6-year-old labradoodle Mocha, are rolling across Massachusetts in seven weeks to raise awareness and funds to combat hunger. Proceeds will go to Save the Children and four Massachusetts-area food banks.

From Oct. 9-15, the convenience store operator will sponsor Roberts' and Mocha's roll/stroll to combat hunger. The duo is expected to pass through the Waltham area from Westborough to Brookline, Global Partners' previous headquarters.

As part of the retailer's sponsorship, it will:

"We're excited to partner with 4Paws 4Wheels 4Hunger and support Mark and Mocha's journey across Massachusetts! Raising funds and food to combat hunger is such a critical issue in our local communities. We applaud Mark's passion and conviction," said Eric Slifka, president and CEO of Global Partners.

Roberts and Mocha will complete the roll/stroll, moving on to West Stockbridge, Boston and finally Provincetown. Donations will go to Save the Children and four Massachusetts-area food banks including: The Greater Boston Food Bank, The Merrimack Valley Food Bank, Worcester County Food Bank, and Food Bank of Western Massachusetts. The map of their route is available here.

The demand for food assistance across Massachusetts grew significantly with the onset of the pandemic and is still above pre-pandemic levels.

"There is an ever-increasing demand on hunger organizations across the state and around the world. Now, more than ever, we need to do what we can to help feed our neighbors. I'm thrilled Global Partners is joining me to raise funds and awareness to fight food-insecurity," said Roberts.

With approximately 1,550 locations primarily in the Northeast, Waltham-based Global Partners is one of the region’s largest independent owners, suppliers and operators of gasoline stations and convenience stores. Global also owns, controls or has access to one of the largest terminal networks in New England and New York, through which it distributes gasoline, distillates, residual oil and renewable fuels to wholesalers, retailers and commercial customers. In addition, Global engages in the transportation of petroleum products and renewable fuels by rail from the mid-continental United States and Canada.