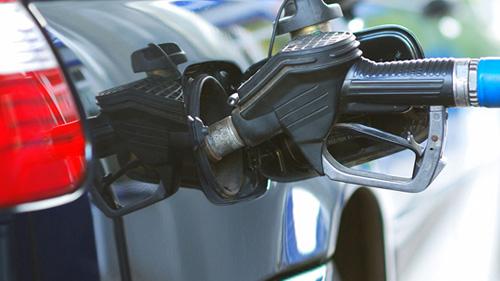 The nearly 40 million motorists hitting the road this week will pay less than they did on Memorial Day.

WASHINGTON, D.C. — There is good news and bad news at the pump. At $2.86, gas prices are at their highest point for Fourth of July holiday in four years. However, prices are 11 cents cheaper than the Memorial Day holiday.

The mixed bag comes as nearly 40 million motorists are expected to hit the road this week, AAA reported.

"However, elevated crude oil prices and other geopolitical concerns could tilt gas prices more expensive in the early fall despite an expected increase in global crude production from OPEC and its partners," she added.

According to AAA, the factors that will continue to impact pump prices through the fall include:

"If U.S. demand remains strong, domestic and global supply decline and crude inventories continues to sell over $70 a barrel, motorists may see the national gas prices average to potentially jump back up to nearly $3 a gallon in coming months," Casselano explained. 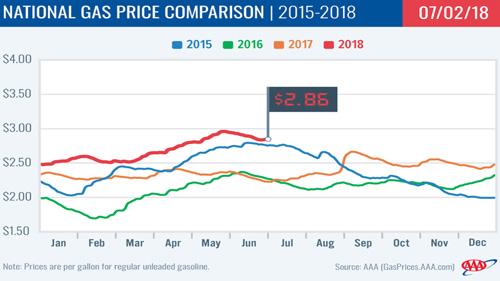 However, the majority of prices in the region have declined since last week, with Nevada and Arizona seeing the largest decrease at three cents each. Only Oregon saw a slight 1-cent increase, AAA reported.

Moving east, the majority of motorists in the Great Lakes and Central region are seeing cheaper gas prices — up to 3 cents less — on the week. However, gas prices are on the rise in Ohio (11 cents), Michigan (10 cents), Indiana (7 cents), Kentucky (5 cents) and Illinois (4 cents) following major decreases in these states at the pump the week prior.

According to AAA, it is typical to see this type of volatility from week to week in the region. With the jump, Michigan's is just one cent away from reaching the $3 threshold with Illinois not far behind at $2.94.

While most gas prices are cheaper in the region on the week, they are extremely expensive compared to July 2017. 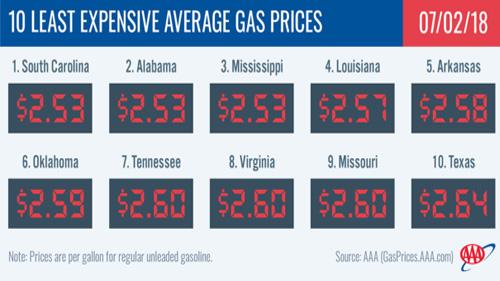 Gas prices in the South and Southeast are seeing volatility on the week with Florida, Oklahoma and South Carolina seeing 3-cent increases while New Mexico, Arkansas and Texas saw prices drop by 2 cents.

All other states are seeing pump prices decline by cent or remain stable from June 25. Alabama, Mississippi and South Carolina have the cheapest gas at $2.53, followed by Louisiana ($2.57), Arkansas ($2.58) and Oklahoma ($2.59).

As AAA reported, most motorists in the region are seeing relief not just on the week, but on the month with gas price averages double-digits cheaper than June: Florida (15 cents), Texas (14 cents), Georgia (13 cents), Alabama (12 cents), Mississippi (12 cents) and South Carolina (10 cents).

Moving north, on the week, motorists in West Virginia (3 cents) and Washington, D.C. (2 cents) were the only locales in the Mid-Atlantic and Northeast region to see gas prices increase.