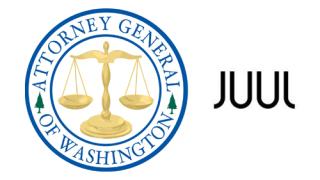 The two-year old lawsuit alleged that Juul violated the law when it designed and marketed its products to appeal to underage consumers and deceived consumers about the addictiveness of its product, according to Ferguson.

In addition to the $22.5-million payment, Juul also agreed to roll out several reforms, including:

As part of the agreement, Juul is required to conduct no fewer than 25 secret shopper checks per month at Washington-based Juul retailers for at least two years, and perform at least one check in every Washington county per year, Ferguson said.

The company is also required to send a regular report to the state attorney general's office detailing the results of the secret shopper program every 90 days.

"Juul put profits before people," Ferguson said. "The company fueled a staggering rise in vaping among teens. Juul's conduct reversed decades of progress fighting nicotine addiction, and today's order compels Juul to surrender tens of millions of dollars in profit and clean up its act by implementing a slate of corporate reforms that will keep Juul products out of the hands of underage Washingtonians."

Under the consent decree, filed in King County Superior Court, Juul is required to pay the $22.5 million total over the next four years. The attorney general's office will establish a new Health Equity unit using these resources.

"This settlement is another step in our ongoing effort to reset our company and resolve issues from the past. We support the Washington State attorney general's plan to deploy resources to address underage use, such as future monitoring and enforcement. The terms of the settlement are consistent with our current business practices and past agreements to help combat underage use while offering adult smokers access to our products as they transition away from combustible cigarettes," Juul said in a company statement.

"Thus far, we have entered into a number of settlement agreements with state attorneys general, including Louisiana, Arizona, and North Carolina. We will continue working with federal and state stakeholders to advance a fully regulated, science-based marketplace for vapor products," the San Francisco-based vapor company added.

In July 2021, North Carolina became the first state to reach a settlement with Juul over concerns that its product attracts underage users.

Under a consent order reached with North Carolina State Attorney General Josh Stein, Juul will pay $40 million and make changes to the way it conducts business. The $40 million, which Juul will pay to the state over six years, will fund programs to help people quit e-cigarettes, prevent e-cigarette addiction, and research e-cigarettes, as Convenience Store News reported.