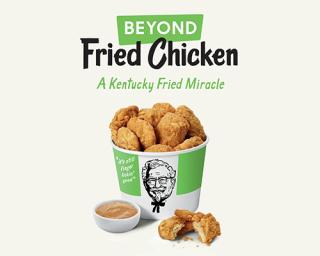 LOUISVILLE, Ky. — Kentucky Fried Chicken (KFC)is partnering with Beyond Meat to introduce Beyond Fried Chicken on Aug. 27 through a limited test run.

The move makes KFC the first national U.S. quick-service restaurant (QSR) to introduce a plant-based chicken, according to the company.

Beyond Fried Chicken will be available exclusively at one Atlanta-area restaurant, located at 2637 Cobb Parkway South East in Smyrna, Ga., near SunTrust Park. Customers can choose to have Beyond Fried Chicken in the form of nuggets, which come with a dipping sauce such as KFC's signature Finger Lickin' Good sauce, or as boneless wings tossed in Nashville Hot, Buffalo or Honey BBQ sauce.

A complimentary sample of Beyond Fried Chicken will be available at the test store from 10:30 a.m. to 6:30 p.m. on Aug. 27, with the purchase of any KFC menu item, while supplies last.

Customer feedback from the Atlanta test will be considered as KFC evaluates a broader test or potential national rollout, the company said.

"KFC is an iconic part of American culture and a brand that I, like so many consumers, grew up with. To be able to bring Beyond Fried Chicken, in all of its KFC-inspired deliciousness to market, speaks to our collective ability to meet the consumer where they are and accompany them on their journey," said Ethan Brown, founder and CEO of Beyond Meat. "My only regret is not being able to see the legendary Colonel himself enjoy this important moment."

Louisville-based KFC Corp. has more than 23,000 KFC restaurants in more than 135 countries and territories around the world.