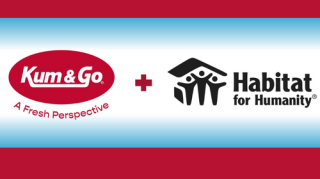 Over the past nine years, the family-owned convenience store chain has raised more than $5 million for Habitat for Humanity and has sponsored home builds with local Habitat affiliates in North Dakota, South Dakota, Iowa, Nebraska, Oklahoma, Colorado, Utah, and Michigan.

As part of the partnership, Kum & Go's holds an annual Donate Change to Make a Change in-store campaign. The fundraiser, which takes place every February, engages store associates and encourages customers to donate to Habitat at checkout at more than 400 convenience stores.

Also in February, the retailer donates 10 cents from every 20-ounce K&G bottle of water purchased to Habitat for Humanity through its Kum & Go's Buy Water & Build Homes initiative.

"Kum & Go is proud to support the affordable housing and financial education services provided by Habitat for Humanity. Through associate and customer engagement, we not only raise an incredible amount of money to support these programs, but also raise awareness about the need that continues to grow across our country," said Emily Bahnsen, community investment manager at Kum & Go.

This year, the in-store campaign and water bottle initiative raised more than $360,000. With their corporate contribution, more than $611,000 in total was donated to Habitat this year. Funds from donations are distributed to 15 Habitat affiliates in locations where Kum & Go operates and support efforts to build decent, affordable housing in local communities.

"We are thrilled to celebrate another year of partnership with Kum & Go," said Julie Laird Davis, vice president of corporate and cause marketing partnerships at Habitat for Humanity International. "We are so grateful to have their associates and customers support our work to create lasting change in the communities they work and live through safe, decent and affordable housing."

The convenience retailer also recently sponsored two new home builds, one in Grand Rapids, Mich., and another in Salt Lake City, where it will be opening Kum & Go stores later this year. These builds are the eighth and ninth homes Kum & Go has sponsored over the course of its partnership with Habitat.

As reported by Convenience Store News, the company is preparing to enter new markets: Utah and Michigan, which will mark the 12th and 13th states in Kum & Go's footprint.

The retailer expects to open 30-plus stores in Utah over the next five years with multiple convenience stores set to open in the Salt Lake City starting this year. The move is the chain's first entrance into a new state in more than a decade.

The Utah locations will continue Kum & Go's focus on fresh food and friendly staff in well-it stores with upscale and uncluttered aisles, according to the company.

Established in Hampton, Iowa in 1959, Kum & Go is a fourth-generation, family-owned convenience store chain providing a fresh perspective by meeting customers where they are and offering them the choices they deserve. For over 60 years, the company has been dedicated to sharing 10 percent of all profits back to the communities it serves.

Habitat for Humanity is a leading global nonprofit working in local communities across all 50 states in the U.S. and in more than 70 countries.