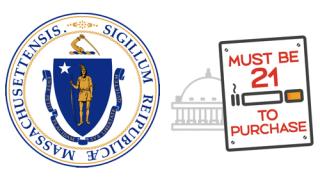 BOSTON — Tobacco 21 has officially become the law of the land in Massachusetts.

Beginning next year, those wishing to purchase tobacco products including cigarettes and e-cigarettes in Massachusetts will have to be at least 21 in order to legally acquire them.

The state Senate and House of Representatives approved a compromise measure to bring Tobacco 21 across Massachusetts — while preventing any city or town from moving to raise the tobacco purchasing age any higher than 21 — earlier this month.

On Friday, Gov. Charlie Baker signed the bill raising the age limit to purchase tobacco products in the state from 18 to 21.

"There's more than enough evidence to support ensuring that we have a statewide standard with respect to when the purchase and use of these products would be considered age appropriate," Baker said.

Prior to Baker’s signing of the statewide measure, more than 170 Massachusetts municipalities had already raised the age limit to purchase tobacco products. The governor, who is an admitted supporter of local control, found this widespread popularity of the policy as a reason to sign the statewide Tobacco 21 bill, which will go into effect Dec. 31.

"At this time, it's our view that a statewide approach is perfectly appropriate," Baker explained.

When Massachusetts' statewide bill becomes law, it will not make it illegal for minors to use tobacco or make it a crime for a parent or adult to give a tobacco product to a minor, as Convenience Store News previously reported. It will, however, ban vaping on school grounds and other public places. It will also make Massachusetts the first U.S. state to outlaw the sale of tobacco in all pharmacies.

Massachusetts will be the sixth state to raise the tobacco buying age to 21, following in the footsteps of Hawaii, California, New Jersey, Oregon and Maine.