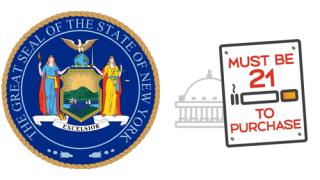 ALBANY, N.Y. — Add New York to the list of states that now prohibit the sale of tobacco products to anyone under 21 years old.

On July 16, Gov. Andrew Cuomo signed legislation into law raising the minimum legal age to buy tobacco products from 18 to 21. The measure goes into effect in 120 days.

"New York is taking aggressive action to stamp out smoking among teens and children, but tobacco and e-cigarette use still persists thanks to irresponsible corporate marketing campaigns targeting young people," Cuomo said.

"By raising the smoking age from 18 to 21, we can stop cigarettes and e-cigarettes from getting into the hands of young people in the first place and prevent an entire generation of New Yorkers from forming costly and potentially deadly addictions," he added.

"Big tobacco and its vaping industry cronies build their business by hooking young people on nicotine. Raising the statewide smoking and vaping age to 21 years old will help prevent a new generation of young people from getting hooked on nicotine," Rosenthal said. "It will also ensure that young people cannot just travel to another county to purchase dangerous and highly addictive cigarettes or e-cigarettes. I thank Governor Cuomo for his continued partnership on this issue."

Hawaii became the first state to increase the tobacco buying age to 21 in January 2016. It was followed six months later by California. Today, 17 states and Washington, D.C., have Tobacco 21 laws on the books.