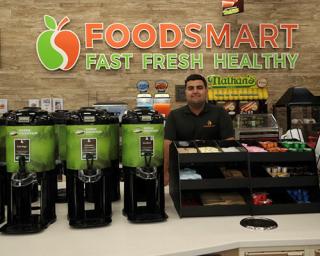 Musa recently welcomed local officials to the newest Fuelco/Foodsmart store for a ribbon-cutting ceremony and tour of the site, which features deeply discounted fuel alongside a store that looks more like a Trader Joe's than a typical c-store.

"We're trying to bring healthy alternatives in terms of snacks to the community, as well as lower-priced gas. It's so low that people think it's a joke," Musa said during the ribbon-cutting, when a gallon of unleaded gasoline cost $1.99 at the location.

The Yonkers store is 22-year-old Musa's second Fuelco/Foodsmart location. The first opened last year in Valhalla, N.Y., in a busy suburban area near the local community college and a children's medical center.

Musa's company currently operates a total of 15 gas stations and is planning to open additional service stations and c-stores in Westchester County and Putnam Valley in New York, Fairfield County in Connecticut, and Miami-Dade County in Florida.

With the Foodsmart brand, Musa is attempting to respond to evolving consumer tastes.

"The world is changing. Diets are changing. Keto friendly, kosher, vegan, vegetarian, gluten free and other dietary restrictions have people transforming their diets," he said. "Unfortunately, most traditional convenience stores have not adapted."

Giving Convenience Store News a tour of both stores, he noted how sales data shows a shift in consumers' snack preferences.

"While Doritos, Coca-Cola and Hershey bars were once top sellers, Foodsmart sales show that traditional snacks are outsold by products like Rhythm Broccoli Bites, Harvest Snaps Green Pea Crisps, Amphora Organic Dried Fruit," noted Musa, who has been in the industry most of his life, as his grandfather and father started the company he now runs.

The reason for these surging sales, he says, is a strategy of targeting dense residential areas and providing a 24/7 convenience store that mimics Trader Joe's and Whole Foods' offerings. According to Musa, he has an advantage over the larger specialty grocers as his lower rent, real estate taxes and payroll, along with fuel sales, allow Foodsmart to sell healthy products for less.

While the Foodsmart stores offer a variety of organic, gluten-free and fair trade snacks, they still provide most traditional convenience store staples as well, from beer and coffee to cigarettes and soft drinks.

"You can't stay in business if you only sell healthy items," said Musa. He did point out, though, that traditional Coke and Pepsi soft drinks take up only three shelves among the 10 cooler doors, which are full of non-traditional drinks like kombucha, Mash, and several varieties of enhanced waters and fruit drinks.

In the future, Musa plans to expand the size of Foodsmart stores from the current 1,800 square feet to 2,500 square feet, and add electric vehicle charging units.

On the fuel side, the company's Fuelco app allows customers to purchase gas at steep discounts. For a limited time, Fuelco was selling regular unleaded gas at $1.99 per gallon through the app. More than 20,000 customers have downloaded the Fuelco app since its launch in 2019.