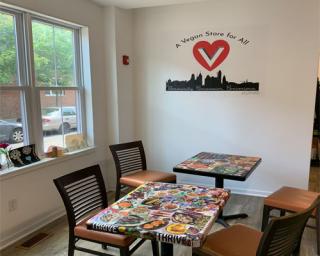 PHILADELPHIA — When people think of a convenience store, what often comes to mind is the typical c-store fare: salty snacks, candy, roller grill items, packaged beverages, grocery essentials and maybe even a take-home meal. They most likely do not think of these items being vegan. However, in today’s modern c-store space, V Marks the Shop is a newcomer looking to fill that niche.

When husband-and-wife duo Carmella Lanni-Giardina and Carlo Giardina went vegan in 2010, they wanted to start a business that would connect with their ethics as vegans: those who abstain from the use of all animal products (meat, eggs, dairy, honey, etc.)

Carmella worked in business-to-consumer e-commerce/IT operations, while Carlo worked in social services. Together, they ran a food blog called the “Food Duo,” but were looking to match their lifestyle to their blog and invest more time in the endeavor.

“The original idea that Carlo had was to have a mobile vegan convenience store, but a wise friend dissuaded us from that. We talked about opening up a café and bookstore, but we kept going back to the store idea,” Carmella recalled. “We were inspired by other vegan stores in the country, as well as Carlo’s paternal grandparents owning a small grocery store in NYC [New York City]. It rather comes full circle in a way, as Carlo’s maternal grandfather was a butcher. Here we are with a vegan store with a plant-based deli case!”

During the process of getting their first brick-and-mortar store going, the couple continued to work part-time on nights and weekends while maintaining an online store and vending at festivals and pop-up markets. They launched Philly Vegan Pop Flea, a vegan pop-up community marketplace to connect with like-minded businesses and customers.

Finally, on Dec. 22, 2018, V Marks the Shop opened at 1515 McKean St. in the Newbold neighborhood of South Philadelphia. Clocking in at a modest 1,000 square feet, the c-store carries more than 300 SKUs, offering a mix of refrigerated, frozen and shelf-stable items.

With a focus on local, V Marks the Shop carries prepared food items from local purveyors such as Tattooed Mom, a local casual-dining establishment; Awesome Foods, maker of raw, organic, gluten-free foods; and Miss Rachel’s Pantry, which is known for serving a prix fixe vegan menu on Saturdays, plus light market-style bites. All of the prepared food items can be heated in a microwave for customers to eat in-store or on the go.

When selecting what products to carry, Carmella and Carlo do as much research on the brands as possible, and give preference to smaller and local businesses.

Since opening, they have set a goal of procuring 50 percent of their products from local sources. The duo is even discussing how to create their own line of vegan food items.

“We listen to our customers, as well as attend trade shows. We also reach out to other vegan stores to ask about some of the products they carry,” Carmella added.

In a nod to Carlo’s original café and bookstore idea, V Marks the Shop has also branched out into selling books, in addition to personal care, household items and other consumer goods, such as items fit for customers’ companion animals.

V Marks the Shop features indoor seating and free Wi-Fi. The store hosts a number of events, including “Sumthin’ Saturdays.” This weekly series may include product demos and samplings, “Micro Pop” markets, arts and crafts days, guest speakers and more.

As for the future of V Marks the Shop, Carmella and Carlo envision the store being a resource and “community connector” when it comes to vegan living and plant-based eating.