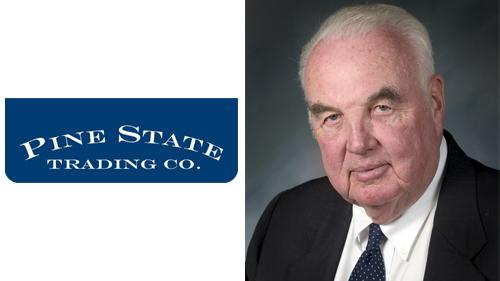 As retired CEO of the family company, Charles F. Canning Jr. stayed true to his roots.

While leading Pine State from a small local Maine distributor of convenience store products and beverages to a regional powerhouse, Canning was extremely loyal and respectful to all his employees and those he did business with, his family said in announcing his passing.

"He never forgot his roots and the value of the people he worked with, which is one of the core values that has guided the family-owned company for three generations," the Canning family said.

Charles Canning was born in Portland, Maine, and raised in Augusta. He graduated from Providence College and spent several years as an officer in the United States Navy.

Charles Canning joined his brother Jack — and a long list of dedicated and loyal people — to grow Pine State into a nationally recognized leader in its industry.

"The dedication and loyalty of Pine State's employees throughout Charlie's career is a significant part of his legacy. He will be remembered by family, friends and former employees as fiercely competitive, extremely loyal, quick-witted and smart, with an uncanny instinct to always do the right thing," said CEO Nick Alberding. "On a more personal note, my Uncle Charlie was a mentor and father figure to me for most of my life, and I thank him dearly for that."

Gena Canning added, "My dad was always an inspiration to all of his children and grandchildren. We continue to strive to live his values every day and pledge to never settle for 'good enough'. He valued excellence in all things and we are proud to carry on his legacy."

Throughout his career, Charles Canning received numerous awards, including the Kennebec Valley Chamber of Commerce Business Person of the Year, as well as the chamber's Lifetime Achievement Award. He was also named a Miller Legend by the Miller Brewing Co.

"My dad was a visionary, always looking for innovative solutions to market and distribute products. He was very intentional in every decision. He was always mindful to never take on too much debt or risk the future of the company and its employees. It was an honor for me to join my father in the family business and to be part of its growth and success throughout the years," Keith Channing said.

His charitable priorities included MaineGeneral Health, the Kennebec Valley YMCA, the Mitchell Institute, and a scholarship endowment for the children of Pine State employees.