WINSTON-SALEM, N.C. — Three months after a proposal was placed on the table, Reynolds American Inc. (RAI) and British American Tobacco (BAT) shook hands on a $49-billion deal to join forces.

RAI agreed to be acquired by BAT in a cash and share transaction valued at $59.64 cents per share, which reflects a transaction price that is a 26.4-percent premium to the RAI stock price on Oct. 20, the day prior to publicly announcing BAT's initial proposal, Susan Cameron, executive chair of the RAI board of trustees, explained in a call Tuesday morning.

"The transaction committee and RAI's full board of directors are very pleased to have reached this agreement as a result of their significant discussions and negotiations with BAT over the past few months following that initial proposal," she said.

The agreement represents a total enterprise value for all of RAI at more than $95 billion and is a 7-percent premium to the original Oct. 20 proposal resulting from BAT's incremental understanding of RAI's unique opportunities for growth in the attractive and profitable U.S. tobacco market.

"What we are announcing today is compelling, strategic and serves to create further value. The acquisition of Reynolds American that we agreed to not only represents a significant premium for our shareholders, but also includes the potential for continued future growth through ownership in the combined company," Cameron said.

This acquisition also increases share, generates considerable significant cost efficiencies, enhances geographic diversification, and significantly strengthens research and development (R&D) capabilities — all of which will result in enhanced growth opportunities for the combined companies, she explained.

It is expected to benefit adult tobacco consumers across the globe, too, by further supporting Reynolds American's ongoing efforts to lead the transformation of the tobacco industry, she added.

"That transformation journey has delivered tremendous progress over the past 12 years, beginning with the business combination between R.J. Reynolds and Brown & Williamson in 2004. First as CEO and now as executive chairman, it has been quite a journey for me as well over the period," Cameron said.

The deal will make RAI the largest operating subsidiary of BAT.

"This next step for us represents a leap forward in RAI's transformation journey as the combined company will have a world-class pipeline of next generation products (NGP), along with global scale and the R&D capabilities of both companies that will fuel the commercialization of innovative tobacco alternatives," Cameron said.

The deal comes at an interesting time for the tobacco industry, which has seen its leading segment fluctuate over the past few years.

"Adult tobacco consumers have really benefited from the improved economy over the past year or two and that impact is starting to stabilize. While cigarettes declined at a slower-than-historical rate in 2015 and 2016, we are now seeing cigarettes return to their historical annual rate of decline of approximately 2 [percent] to 4 percent, and our companies have demonstrated an ability to successfully manage this trend," explained Debra Crew, RAI president and CEO.

As she explained, moist snuff volumes continue to grow, and profit growth in both tobacco segments remains favorable.

In addition, RAI sees opportunity as adult tobacco consumers look for alternative tobacco products, and the company is "investing significantly" in those alternatives, Crew added.

"RAI's operating companies and their brands are well-positioned for continued industry leadership and sustainable long-term growth across a wide range of future scenarios," she said.

Crew also explained that "one of the exciting elements of the transaction" is the opportunity created from bringing the Newport, Kent and Pall Mall brands under the same global company.

A LOOK AT THE NUMBERS

Under the terms of the deal, BAT will acquire the 57.8 percent of RAI common stock that it does not currently own for $29.44 per share in cash, and a number of BAT American Depositary Shares representing 0.5260 of a BAT ordinary share, currently worth $30.20 per share based on the BAT closing share price as of Jan. 16, and the corresponding Dollar-Sterling exchange rate.

The transaction has been approved by the independent directors of RAI, who formed a transaction committee to negotiate with BAT, given BAT's existing ownership stake and representation on RAI's board of directors, and by the boards of directors of both companies.

Current RAI shareholders will represent about 19 percent ownership of the combined company, according to Cameron, and more than 40 percent of the profits.

The developed and emerging market opportunities will be addressed with a portfolio of global brands, including Dunhill, Kent, Lucky Strike, Pall Mall and Rothmans.

"We believe there is also meaningful opportunities to share global best practices across both of the organizations, as well as global collaboration and sharing of both companies' R&D expertise and talent across the new, enlarged group," Gilchrist explained. "The new combined company will also possess a global next generation products business with a world-class pipeline of innovative vapor and tobacco heating products with access to the fastest-growing NGP markets."

According to BAT's Chief Executive Nicandro Durante, the United Kingdom-based company has been a shareholder in RAI since 2004 and has benefited from the success of its present management team's strategy, including its 2015 acquisition of Lorillard Inc. — which BAT supported with its own investment.

"BAT has consistently executed a winning strategy and has a proven track record of delivering strong results and returns for its shareholders while successfully investing for future growth," Durante said.  "Our combination with Reynolds will benefit from utilizing the best talent from both organizations. It will create a stronger, global tobacco and NGP business with direct access for our products across the most attractive markets in the world.  We believe this will drive continued, sustainable profit growth and returns for shareholders long into the future."

To view RAI's investor presentation on the transaction, click here. The two tobacco companies have also created a transaction website to provide details on the merger. 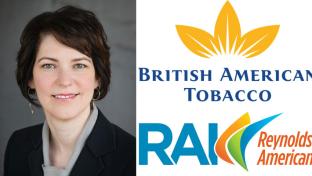 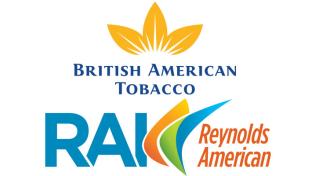 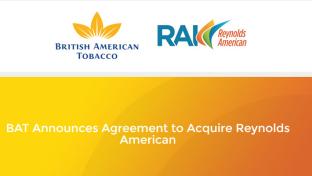