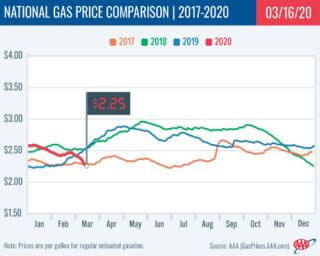 On the week, gas price averages in 35 states decreased by double-digits, pushing the national average to $2.25, the cheapest price point of the year.

"The national gas price average is 13 cents cheaper on the week and nearly 20 cents less than the beginning of the month. These are significant decreases in just seven and 16 days," said Jeanette Casselano, AAA spokesperson. "AAA expects gas prices to continue trending cheaper, with the high likelihood of the national average hitting $2/gallon before the end of March."

By region, here's how the country is faring:

Some of the largest weekly pump price savings in the country can be found in the Great Lakes and Central states. Eight out of the top 10 largest weekly decreases are states from the region: Ohio, Kentucky, Michigan, Wisconsin, Indiana, Illinois, Iowa and Minnesota.

All states in the region saw double-digit decreases, with South Dakota (down 10 cents) seeing the smallest decrease on the week.

With the substantial drops at the pump, state gas prices in the region are relatively cheap, ranging from as low as $1.98 in Missouri to a high of $2.30 in Illinois.

State gas price averages in the South and Southeast are 10 to 15 cents cheaper on the week. Oklahoma (down 15 cents) saw the largest decline in the region and ranks among the top 10 states with the biggest pump price change in the last seven days.

On the week, motorists in the Mid-Atlantic and Northeast region saw average declines of 6 to 15 cents. Maine ($2.21) saw the biggest weekly difference of any state in the region.

Regional gas price averages range from as cheap as $2.18 in Colorado to $2.53 in Idaho.

Like the rest of the country, pump prices in the West Coast region have declined and are poised to continue their descent this week, as crude prices remain low. When compared to a week ago: