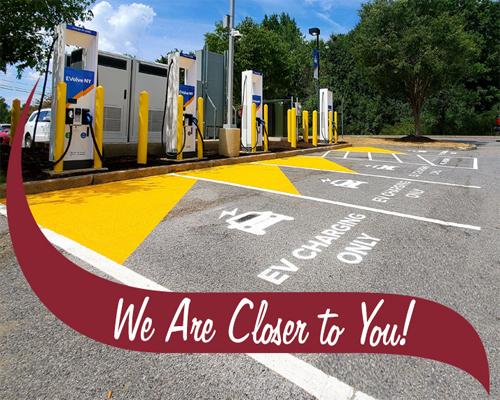 Expected to be fully operational by September, the Schodack electric vehicle (EV) charging station is one of five that Stewart's Shops plans to open by the end of the year.

The Schodack site, at 1811 Columbia Turnpike, will have three 150kW Direct Current (DC) Fast Charger stations and one 350kW charger, which is capable of charging a compatible vehicle at speeds up to 20 miles per minute. Two of the charging stations will be equipped with both fast charging connectors, Combined Charging System and CHAdeMO, so all electric vehicles, including Tesla cars with an adapter, can plug in.

"More New Yorkers are opting to drive emission-free electric vehicles which helps to reduce greenhouse gas pollution from the transportation sector," Cuomo said. "By working with Stewart's Shops, and other private entities to strategically deploy charging infrastructure across the state, we will all benefit from an expanded network that will make it easier and more affordable to drive electric resulting in reduced emissions and improved air quality in communities throughout New York."

The five Stewart's fast-charging stations will offer a total of 20 chargers. NYPA will construct, own and operate the hubs in coordination with Stewart's site hosts. The Schodack location will be the 10th installation in NYPA's EVolve NY network.

"By partnering with EVolve NY, we are proud to offer our customers more options for 'filling' up their tanks. The 20 EVolve NY Chargers will grow our fast charging network to more than 80 units," said Stewart’s Shops President Gary Dake. "Stewart's Shops is known for a quick in and out and these fast chargers will provide the convenience our customers know and expect. As an energy provider for today and into the future, we have the ability to fuel any vehicle and grow our EV network at strategic locations. The partnership with EVolve NY is just one of the ways Stewart's Shops is attaining a more sustainable future."

The new charging stations are the latest steps Stewart's Shops is taking to become more sustainable. The retailer currently:

Additionally, all Stewart's Shops locations are equipped with LED lighting and offer plant-based straws as well.