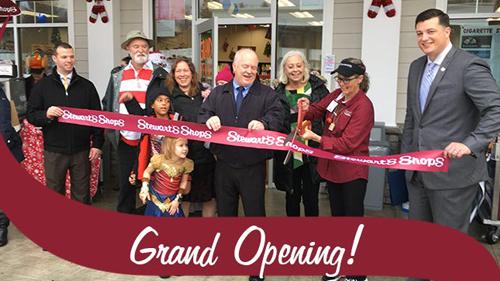 The Stewart's Shops in New Lebanon, N.Y., marked the 12th and final store completion for 2018.

SARATOGA SPRINGS, N.Y. — Stewart's Shops is heading into 2019 with a full plate, not unlike the year it just wrapped up.

The Saratoga Springs-based convenience retailer will invest more than $50 million in construction of new convenience stores and additions, with 18 new locations slated.

As it moves through its construction agenda, Stewart's Shops may close some smaller stores that cannot serve customers with the standards they expect, according to the company.

"With these improvements and changes, Stewart's Shops seeks to keep up with the busy lifestyle of its customers — while also combating increased competition in a thriving convenience industry," the company said.

The 2019 expansion plan comes on the heels of a busy 2018. In the past 12 months alone, Stewart's Shops built 12 new locations and completed 12 major store additions in upstate New York and Vermont.

The Stewart's Shops in New Lebanon, N.Y., marked the 12th and final store completion for 2018, with a grand opening celebration on Dec. 20. The previous c-store was torn down and the new one was built in its place.

In addition to traditional stores offerings, the location boasts plenty of seating, and expanded parking and fuel service with diesel and kerosene.

Earlier in December, the retailer opened a new Stewart's Shops store in Schroon Lake, N. Y. In addition to the retailer's typical offerings like pizza by the slice or pie and a beer cave with craft, domestic and imported beer, the c-store features a walk-up ice cream window with "a million-dollar view of Schroon Lake."

Other projects in 2018 included a couple of new store openings in August paired with the openings of two remodeled locations.

New Stewart's Shops sites welcomed customers that month in two towns: Middletown and Berlin. The retailer also welcomed customers back to remodeled stores in Glen Falls and Troy in August. All four of the c-stores are in New York.

Additional Stewart's Shops that cut the ribbon in 2018 — a mix of new-to-industry, remodeled and replacement stores — include locations in Charlton, Greenville, North Creek, Plattsburgh, and Schenectady, N.Y.