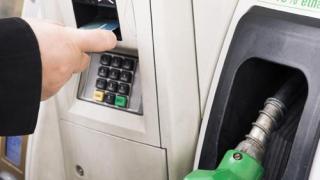 WASHINGTON, D.C. — Days after President Biden revealed the latest move to ease the pain at the pump, there are signs it may be working.

On March 31, Biden announced his administration is putting 1 million additional barrels of oil from the Strategic Petroleum Reserve (SPR) on the market per day on average for the next six months. The "unprecedented" release will provide a historic amount of supply to serve as a bridge until the end of the year when domestic production ramps up, the White House said.

According to the latest AAA report, the president's decision helped send the global oil price tumbling to near $100 per barrel. In addition, the national average for a gallon of gas has fallen to $4.18.

"The upward push on oil prices caused by Russia's war in Ukraine is meeting stronger downward pressure from the planned SPR oil release and increased COVID fears in China," said Andrew Gross, AAA spokesperson. "And lower global oil prices are reflected in falling pump prices for consumers in the U.S."

The drop in gas demand, alongside growth in total stocks, contributes to price decreases. If demand continues to decline as gasoline stocks continue to build, the national average will likely continue to move lower, AAA pointed out. 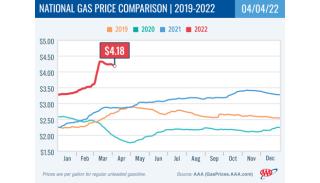 On April 4, the national average for a gallon of gas was $4.18, which was 6 cents less than a week ago, 35 cents more than a month ago and $1.31 more than a year ago, according to the association.

However, the president is going one step further this time. In addition to tapping into the SPR, the administration's plan also calls for a boost in domestic oil production — which is expected to increase by 1 million barrels per day this year and nearly 700,000 barrels per day next year.

However, Biden said some companies are not doing enough, and he called on Congress to make companies pay fees on wells from their leases that they haven't used in years and on acres of public lands that they are sitting on without producing.