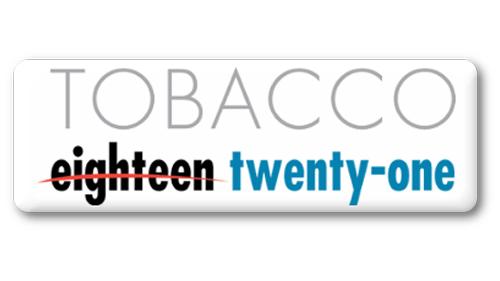 Dover — A new tax on vapor products went into effect on Jan. 1. The levy comes in at 5 cents per fluid millimeter of e-liquid. In addition, the state's cigarette excise tax rose 50 cents to $2.10 per pack.

Topeka — the Topeka City Council voted 8-2 to increase the legal minimum age to buy tobacco products. The ordinance went into effect hours after the tally. Retailers face a $200 fine for violating the new law.

Indianapolis — A bill to raise the legal minimum age to buy tobacco products to 21 statewide failed in the Indiana House of Representatives when House Speaker Brian Bosma (R-Indianapolis) used a procedural measure to kill the bill.

The House Public Health Committee had previously approved the bill by a 9-0 vote. However, House Republicans had argued it would cost the state $14 million a year in lost cigarette tax revenue.

Springfield — Local lawmakers passed a proposal to set 21 as the legal minimum age to purchase tobacco products. According to the measure, a store can be fined $100 for a first offense, with fines and civil penalties increasing for subsequent violations. The Public Health Council previously adopted the ordinance, but enforcement of the policy with fines and other penalties needed council approval.

Missoula — The Missoula Health Department has recommended officials update the city's smoking ordinance to include a ban on vaping in all locations smoking is prohibited.  The current smoking measure was adopted in 1999.

Other recommended updates include guides on the construction of smoking shelters and giving property owners the option to restrict smoking within 25 feet of their property or business.

Lincoln — State legislators have introduced two tobacco-related bills. One measure would set a 50-cent cap on the cigar cost, a change from the current tax rate of 20 percent of the wholesale price. A competing bill would increase that tax rate to 45 percent of the wholesale price, increase the state's cigarette excise tax from 64 cents a pack to $2.14 a pack, and up the tax on snuff tobacco from 44 cents to 1 per ounce.

Concord — State lawmakers are considering a bill to raise the legal minimum age to buy tobacco products to 21 statewide. The measure had its first committee hearing on Jan. 18. If approved, it would go into effect on Jan. 1, 2019.

Santa Fe — By a 4-2 vote, the state Senate Education Committee approved a bill aimed at increasing the state's tobacco taxes. It now heads to the Senate Corporations & Transportation Committee.

Under the proposal, the state's cigarettes excise tax would increase $1.50, rising from $1.66 per pack to $3.16 per pack. In addition, the tax rate on cigars would jump from 25 to 76 percent of the wholesale price.

Salem — The state's Tobacco 21 law, SB 754, has been in effect since Gov. Kate Brown signed it into law Aug. 9; however, enforcement and fines began Jan. 1. Under the new law, violations are punishable by a fine of $50 for employees, $250 for store managers, and $500 for managers and owners. The fines double by the third offense.

The law makes Oregon the fifth state to set 21 as the legal minimum age to buy tobacco products.

Charleston — State Sens. Ron Stollings (D-Boone), Roman Prezioso (D-Marion), Mike Woelfel (D-Cabell), Stephen Baldwin (D-Greenbriar), and Robert Beach (D- Monongalia) introduced Senate Bill 13 to prohibit the sale of tobacco products to anyone under 21. The measure was referred to the Senate Committee on the Judiciary after its first reading, and is then scheduled to go to the Senate Committee on Finance.

If it goes into effect, retailers violating the age requirement face fines starting at $50 for a first offense, reaching $5,000 for multiple offenses within a five-year period.