Cottonwood — The city has joined the movement to increase the legal age to buy tobacco products from 18 to 21, becoming the first city in Arizona to pass such a measure. The new minimum age goes into effect in June.

San Diego — The Save Lives California campaign has collected more than a million signatures to qualify a ballot measure to raise California's cigarette tax by $2 a pack. The campaign is backed by billionaire environmentalist Tom Steyer, medical groups and organized labor.

Nearly 600,000 signatures of registered voters must be verified for the proposed state constitutional amendment to make the Nov. 8 ballot. The increase would nearly triple the levy to $2.87 a pack.

Springfield — On its third reading, the Illinois Senate passed a bill to increase the minimum age to buy tobacco, by a 32-22 vote. Six legislators abstained. The measure now moves to the Illinois House.

Overland Park — The city council approved a measure raising the minimum age for buying tobacco products from 18 to 21. After an hourlong debate, the city became the 11th municipality in the Kansas City area to enact the new legal buying age. The new ordinance would restrict the buying and selling of nicotine products by people under 21, including smokeless tobacco, but does not address possession.

Brockton — Add Brockton to the growing list of municipalities to hike the minimum age to buy tobacco products. The Board of Health approved the move in early May. It also approved a cap on the number of tobacco retailer permits, setting it at the current number that exist in the city, and banned the grandfathering of a permit if a business is sold. Pharmacies will be prohibited from selling any sort of tobacco products.

The board additionally prohibited the sale of single cigars and blunt wraps, as well as packages of two or more cigars for less than $5. These changes will go into effect on Sept. 30, with violations starting at $100.

Cohasset — The Board of Health approved raising the minimum age to buy tobacco products to 21. The new rule goes into effect June 1. The town also banned the sale of flavored tobacco products except in tobacco specialty stores; capped the number of tobacco sales permits in town to seven; and increased the fines for retailers who violate any of the new ordinances.

First-time violations will now carry a $300 fine, while second offenses come with the fine and a seven-day suspension of the store's tobacco sales permit. A third violation means the store's permit will be suspended for 30 days in addition to the fine.

North Attleborough — The Board of Health in this Massachusetts town passed a regulation increasing the legal age to buy tobacco products from 18 to 21. The rule goes into effect July 1. A first offense brings a $100 fine. If the business violates the regulation again within 24 months of the first violation, they will be fined $200 for the second offense, $300 for a third offense, and may lose their license to sell tobacco products after a fourth offense.

St. Louis — Organizers of the Raise Your Hands For Kids movement have surpassed the 168,000 signatures needed to place a 60-cent tax increase on the state ballot in November. The group submitted a petition with more than 320,000 signatures to Missouri Secretary of State Jason Kander for review on May 9. Missouri currently has the lowest tobacco tax in the nation at 17 cents per pack.

The proposed measure would raise more than $305 million in revenues annually for early childhood programs, being phased in over four years.

Trenton — The New Jersey Senate Health, Human Services and Senior Citizens Committee cast votes in favor of a bill that would ban the sale of vapor products in flavors other than clove, menthol and tobacco. The bill was referred to the Senate Budget and Appropriations Committee on May 16. It must now be passed by the full state Senate and Assembly, and signed by Gov. Chris Christie to become law.

Albany — Lawmakers in Albany County approved a bill to raise the minimum age to buy tobacco products from 18 to 21. The measure passed 24-13 with one abstention. The move now awaits County Executive Daniel McCoy's signature before it can become law.

Mayville — Chautauqua County Executive Vince Horrigan signed a law to raise the legal age for purchase of tobacco products in the county to 21. This legislation was passed by a bipartisan supermajority of the Chautauqua County Legislature in April. The law will take effect Oct. 1.

Bismarck — The Raise It for Health ND coalition is collecting signatures for a petition to increase North Dakota's tobacco tax. The proposed increase would hike a pack of cigarettes by 44 cents to $2.20. The coalition is hoping to gather enough signatures to place the proposal on the November ballot.

Charleston — The West Virginia House of Delegates rejected a move to raise the state's tobacco tax. By a 44-to-55 vote, lawmakers shot down a bill that would have increased the tax on other tobacco products from 7 percent to 12 percent and raised the tax on cigarettes by 45 cents per pack. The measure had barely passed the state Senate by a 17-to-16 vote a week earlier. 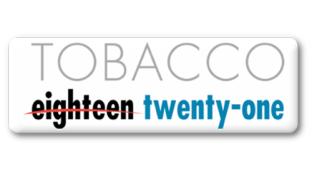