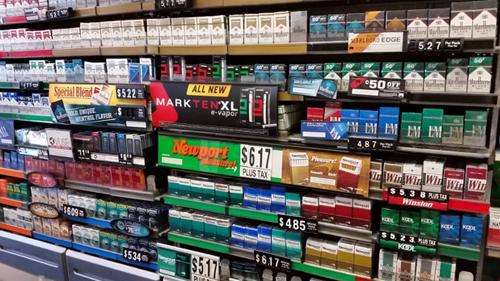 Alameda — City officials approved a proposal to ban the sale of flavored tobacco, including menthol. The new legislation goes into effect July 1. In addition, pharmacies will not be allowed to sell tobacco products after July 1.

Santa Cruz — Elected officials in Santa Cruz passed a ban on the sale of flavored tobacco products. The regulation goes into effect Jan. 1, 2020.

San Rafael — The Marin County Board of Supervisors approved a ban on the sale of flavored tobacco and vapor products in the county. The ban includes menthol tobacco products. The new rule goes into effect in July and tobacco stores have until 2020 to sell their inventory.

Normal — Town officials hiked the legal minimum age to buy tobacco products, including vapor products, to 21. The change goes into effect Dec. 1. The ordinance sets fines of $50 for the first violation and $500 for repeat violations.

Springfield — The Illinois State Senate voted 36-19 to override Gov. Bruce Rauner's August veto of a Tobacco 21 measure. However, the override bid fell short of the needed 71 votes in the state House of Representatives.

Ashburnham — The local Board of Health passed two pieces of tobacco legislation in early November: a Tobacco 21 ordinance and restrictions on the sale of flavored tobacco products. The Tobacco 21 measure will close a loophole that grandfathers in tobacco consumers who turn 18 before the state's legal age increases to 21 across Massachusetts on Dec. 31.

Hingham — The Hingham Board of Health voted in favor of a Tobacco 21 measure. Hingham's previous legal minimum age to buy tobacco products was 19. A Tobacco 21 measure goes into effect statewide on Dec. 31; however, under the state law consumers who turn 18 before that date will be able to purchase tobacco in municipalities that have existing local ordinances setting the age at 18, 19 or 20.

Brooklyn Center — The City Council unanimously approved a Tobacco 21 ordinance on Nov. 4. It becomes the 16th municipality in Minnesota to increase the legal minimum age to buy tobacco products to 21. The city is also the first to restrict the sale of all electronic cigarettes to adult-only tobacco stores.

Fergus Falls — Otter Tail County will become the first county in Minnesota to set the legal minimum age to buy tobacco at 21. County officials approved the ordinance on Nov. 13 and it goes into effect Jan. 1.

Hermantown — The Hermantown City Council voted 5-0 to prohibit the sale of tobacco products to anyone under 21 years old. The age restriction goes into effect Jan. 1.

Lauderdale — By an unanimous vote, the Lauderdale City Council approved an ordinance banning the sale of tobacco products to anyone under 21. The new age restriction goes into effect Feb. 1.

Mendota Heights — The City Council voted to increase the legal minimum age to buy tobacco products to 21 on Nov. 20. In addition, the council members approved to add menthol to the flavored tobacco restrictions they passed in May. Flavored tobacco, including menthol, cannot be sold at any retailer in Mendota Heights.

Waseca — The Waseca City Council held a first reading of a Tobacco 21 measure. The council will hold a public comment on the proposal on Dec. 18.

Helena — A bid to raise the state's cigarette excise tax to $3.70 per pack was defeated at the ballot box on Election Day. If approved, the measure would have also raised the tax on moist tobacco and created a tax on vapor products. Estimates had put the additional revenue at $74 million a year by 2023. The state proposed using the funds to extend the Montana Medicaid program.

Salem — The Oregon Health Authority proposed increasing the state's cigarette excise tax by $2. Now set at $1.33, the hike would bring the levy in line with California and Washington with excises taxes of $3.50 per pack. The authority said the move would raise $293 million in the next two-year budget cycle.

Sioux Falls — South Dakota voters came out against a measure to raise state cigarette excise tax by $1 per pack. In the final tally, 55 percent cast votes against the proposal vs. 45 percent who cast votes in favor of it. The money would have supported technical schools.