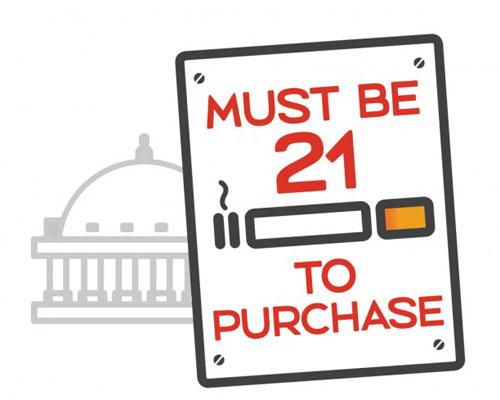 Belmont — The Belmont City Council established a subcommittee to explore measures to limit vaping and the use of flavored tobacco products by underage users. Mayor Doug Kim initiated the discussion at a previous council meeting.

Palatine — The Palatine Village Council voted to prohibit vaping in public spaces, effective Jan. 2. The vote amended already a smoking ban already on the books to include electronic cigarettes and vapor products.

The ban covers public spaces such as bars restaurants, offices and the commuter rail station. Vaping will also be prohibited within 15 feet of a door to a public place. First time violators could be fined up to $100.

Lawrence — The Douglas County Commission voted in favor of raising the legal minimum age to buy tobacco products to 21. Approved on Sept. 26, the regulation does into effect in 30 days.

Baton Rouge — The presidents of the Orleans and Jefferson Parish Medical Societies joined Smoking Cessation Trust CEO Mike Rodgers in efforts to push the state legislature to raise the legal minimum age to buy tobacco products to 21. The current age is 18.

During the moratorium, the council will consider possible amendments to the zoning code and policies related to tobacco shops.

Minnetonka — City officials approved a proposed Tobacco 21 measure, banning the sale of tobacco products to consumers under 21 years old. It is the 12th municipality in the state to raise the legal minimum age.

Any ordinance needs to be considered by the committee and then the full council before any. The committee will meet on Oct. 24.

Albany — A law banning the sale of tobacco products pharmacies across Albany County went into effect Sept. 25. County officials approved the measure in March. Roughly 33 retailers will be affected by the change.

Carmel — The Putnam County Board of Legislators tabled a vote on a proposed Tobacco 21 measure. The lawmakers moved the vote from Sept. 5 to its full legislative meeting in October. The legislation needs a supermajority to pass; six of the nine lawmakers would have to vote yes.

Elizabethtown — The Essex County Board of Supervisors voted on Sept. 4  to approve a measure to prohibit the sale of tobacco products to anyone under 21 years old. The new law will be complaint-driven and enforced by the county health department director or its designee.