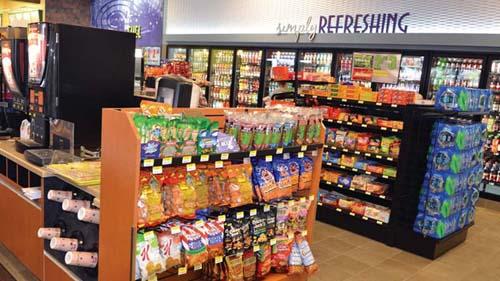 ALEXANDRIA, Va. — Expanded assortments of healthy snack and drink options drove positive revenue growth for convenience store retailers in the first six months of the year, according to a survey by NACS, the Association for Convenience & Fueling.

C-stores sell nearly 80 percent of the fuel purchased in the United States and conduct an estimated 165 million transactions a day, making the industry a good indicator for trends related to travel and consumer spending, according to NACS.

The focus on fresh and healthy items is helping to boost sales, according to the survey, and retailers plan to dedicate more sales space to the items. Retailers cited the addition or expansion of the following items in their stores:

Tulsa, Okla.-based Muskogee Creek Nation Travel Plazas noted healthy snacks is driving in-store sales, according to NACS, which added the alternative snacks category, driven by protein- and energy-rich items, is one of the faster growing categories in the convenience retailing industry.

At J.R.'s Country Stores, based in Pueblo, Colo., foodservice is expected to draw customers — a trend carrying over from last year.

In the survey, retailers also cited their core offer of delivering value and choice for consumers, whether for healthy or indulgent food and beverage options.

"Fresh salads and smoothies, along with burgers and fries, seem to be the big winners so far in 2018 — the full spectrum of pleasure food vs. healthy options," said Dennis McCartney at Landhope Farms, based in Kennett Square, Pa.

Notably, during the first six months of 2018:

In addition to in-store offers, retailers said sales growth will be fueled by generally low gas prices, warm summer weather and strong consumer confidence. With these factors in place, retailer confidence has increased, with a record 86 percent of convenience retailers indicating they are optimistic about their business prospects over the third quarter, up three points from last quarter and tied for the highest measured since NACS debuted the retailer sentiment survey in 2015.

The quarterly NACS Retailer Sentiment Survey tracks retailer sentiment related to their businesses, the industry and the economy. A total of 74-member companies, representing a cumulative 2,106 stores, participated in the July 2018 survey.