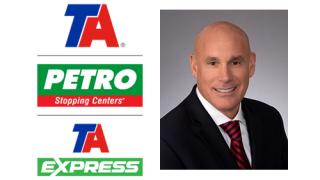 WESTLAKE, Ohio — Despite the pandemic-related challenges the industry has faced in the past year — particularly its impact on fuel — TravelCenters of America Inc. (TA) is sharpening its focus on diesel fuel.

TA saw its overall fuel volume increase 11.2 percent in the first quarter of 2021, driven by a 13.6-percent increase in diesel fuel volume. CEO Jonathan Pertchik attributed the uptick to an increase in trucking activity, the addition of new fleet customers, and an overall increase in volume from existing customers due to the early success of a variety of initiatives. Gasoline volumes, however, continued to be adversely impacted by COVID-19, he said during the company's first-quarter earnings call, held May 4.

"The management team is dedicating tremendous energy and focus to unpacking diesel margin to drive both higher margin, as well as to improve stability — the latter of which may include how much inventory we hold at any given time, as well as the potential for trading and hedging," Pertchik explained.

Even with diesel fuel headwinds at the end of 2020 and the first two months of this year, TA more than doubled its year-over-year EBITDA "due in part to an overall resiliency combined with strong diesel fuel volumes, as well as our non-fuel businesses," he said, noting that the headwinds have "largely dissipated."

Similar to the creation of its hospitality division, which brought its restaurants, retail and gaming under one umbrella, TA created a commercial division to combine fleet, fuel and truck service into one operating unit during the first quarter.

"Under this new construct, we are extremely focused on methods for growing our retail diesel, which provides the highest-margin opportunity for TA, while also carefully exploring methods for addressing volatility," Pertchik said.

Westlake-based TA has a network comprised of more than 270 locations in 44 states and Canada, principally under the TA, Petro Stopping Centers and TA Express brands. It also operates more than 600 full-service and quick-service restaurants and nine proprietary brands, including Iron Skillet and Country Pride.