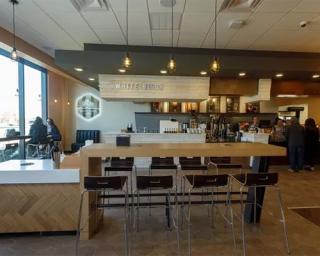 Five shops have opened since November 2017, and the company plans to open five to seven more locations in 2018, reported The Tennessean.

The first standalone White Bison Coffee shop opened in Nashville's The Nations neighborhood, followed by locations inside Twice Daily stores in Murfreesboro, Gallatin and Franklin, Tenn. These stores have an updated look compared to a standard Twice Daily c-store and do not offer lottery ticket sales.

One planned location will combine a Twice Daily market with a White Bison Coffee Shop. Located in a two-story, 3,340-square-foot building at 2607 12th Ave. S. in Nashville, the store will offer:

The combination store, which will not sell gas, is scheduled to open in summer 2018.

"It's a respite for a nice cup of coffee and a sandwich, or, if it's a Saturday morning and they forgot to get eggs to make pancakes at home, they can come get a dozen eggs, too," stated Dawn Boulanger, vice president of marketing for Tri Star Energy.

With this strategic move into coffee, Tri Star's goal is to capture a new audience and appeal to consumers' growing demand for convenience in shopping and dining, according to the report.

"People that may have in the past driven onto our lot and gotten what they needed to get and then gone across the street to another coffee shop, they don't have to do that anymore. They can get it there with us," Boulanger said.

The White Bison Coffee brand could eventually expand outside middle Tennessee, but Tri Star has not identified specific markets, according to the vice president.