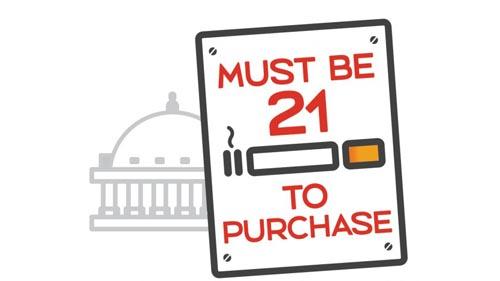 WASHINGTON, D.C. — Beginning midsummer, retailers under the U.S. Department of Defense umbrella will be prohibited from selling tobacco products to anyone under 21.

The military's Tobacco 21 law goes into effect on Aug. 1. The rule will require all defense department retailers to check for ID for 21; however, there are no plans to enforce a smoking ban for underage troops, according to the Military.com.

"You have to have a photo ID; you have to show that you are the appropriate age, over 21, to purchase these products," Corey Fitzgerald, the Army Public Health Center's lead for Army Tobacco Free Living, told Military.com. "Research has shown that raising the legal age of [tobacco sale] to 21 likely reduces youth tobacco initiation use."

Under the new law, retailers located on military bases must post signs about the higher legal minimum age to buy tobacco products no later than July 1 and to stock "sufficient quantities of tobacco cessation products," the website said.

Despite the new T21 law, the defense department will not enforce a ban on underage tobacco use on its bases or penalize older soldiers from buying tobacco products for military members under 21, Fitzgerald said.

"When you look at the policy, the policy doesn't really focus or address penalties on the user," he said. "For those older folks that are able to purchase tobacco ... the best way they can help is to support the Tobacco 21 law."

The push to raise the legal tobacco buying age to 21 began growing at the state and local levels over the past few years, while the federal age remained at 18. However, President Trump signed legislation that included a federal Tobacco 21 measure in December, as Convenience Store News previously reported.