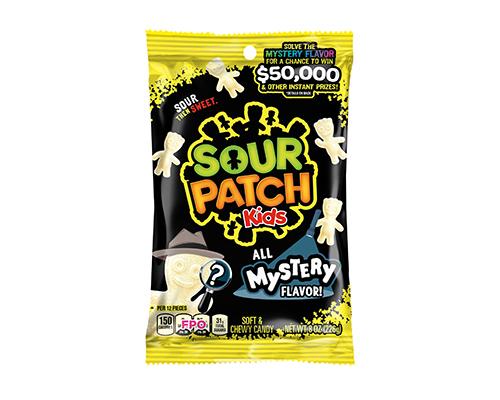 The convenience store retailer is the exclusive location to buy a Mystery Kids flavor-only package of Sour Patch Kids candy this summer.

Mondelēz International Inc. launched the Sour Patch Kids Sweepstakes and Instant Win Game to celebrate the introduction of the candy brand's new flavor. Consumers are invited to try the "sweet, then sour" mystery flavor and submit a guess to win a $50,000 grand prize or nearly 200 other prizes, including a camera, tablet, mini drone and a detective pack to solve the next big case. While the mystery flavor can be found in mixed flavor packages elsewhere, 7-Eleven is the only retailer where fans can buy packages of Mystery Kids Flavor alone.

Available at participating 7-Eleven stores while supplies last, the eight-ounce sharable package of Mystery Kids Flavor has a suggested retail price of $2.89. Detectives can enjoy two packs for $4 until June 29, maximizing their chances of solving the flavor mystery.

"When the Sour Patch Kids team said they were introducing their first-ever mystery flavor, 7‑Eleven immediately wanted in on the fun," said Brooke Hodierne, 7‑Eleven vice president of merchandising. "We've shared several successful exclusives in the past featuring everyone's favorite sour candy, including a zombie pack, a flavor showdown between Redberry and Blue Raspberry, and the No. 1 limited-time Slurpee flavor — Sour Patch Kids Watermelon. This year, discerning taste buds become detectives … so to speak, and the flavor fans who solve the mystery could earn a sweet reward."

The Sour Patch Kids Sweepstakes and Instant Win Game runs through Aug. 15. Details on how to enter can be found on the back of specially marked packages. During the promotion, entrants can text "MYSTERY" to 89884 to obtain to promotional URL or visit www.sourpatchkidsmystery.com and follow the links. Instructions explain how to complete the registration form and enter a guess for the mystery flavor. No purchase or text is required to enter.

Clues about Mystery Kids Flavor can be found on packages and will be posted weekly on Sour Patch Kids social media channels.

Irving-based 7‑Eleven operates, franchises and/or licenses more than 77,000 stores in 16 countries and regions, including 16,000 in North America.