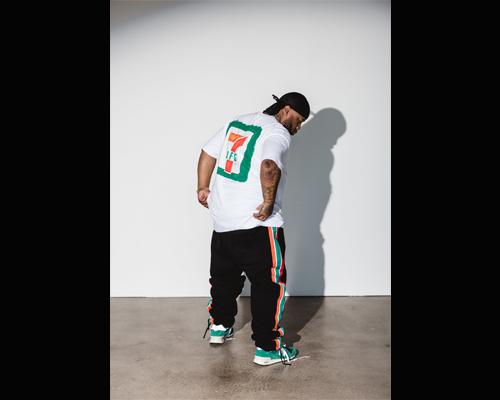 The limited-edition pieces are expected to sell out within hours. According to 7-Eleven, whenever Freshgoods releases a new collection in his hometown, consumers line up around the block to get their hands on one of his exclusive designs. But once they're gone, they're gone.

"We are stoked to roll into Brainfreeze SZN with Joe Freshgoods — one of the coolest collabs in 7-Eleven history," said Marissa Jarratt, 7-Eleven senior vice president and chief marketing officer. "We especially wanted to ramp up the summer fun factor this year after missing out in 2020, and skater fans can count on 7-Eleven's 24/7 convenience to keep them fueled whether they're mastering a new trick, skating around town or watching pros catch some air at the skate park."

7-Eleven tapped Freshgoods, who is referred to as the most iconic designer in streetwear history, to create several pieces using his unique style and the signature orange, green and red 7-Eleven colors. The collection includes sweats, shirts and socks, and sticker packs.

Hailing from Chicago's West Side, Freshgoods is a designer and creative director who uses a unique blend of brand narrative, and historical and cultural references to create authentic connections with streetwear lovers all over the world. A co-owner of Chicago creative hub Fat Tiger Works, Freshgoods has held partnerships with brands across the world including AT&T, McDonald's, the Chicago Bears and New Balance. His collections have been featured in Vogue, GQ and Complex.

An avid proponent of arts education, Freshgoods said his real mission is to tell stories through his collections.

"I'm beyond excited to bring this collab with 7-Eleven to life. Growing up in Chicago, I would always hit up the local 7-Eleven on Division and Lockwood to grab a Slurpee drink or a snack and just hang out with friends," said Freshgoods. "While that store is now closed, the brand reminds me of being young and free, so I had a lot of fun coming up with these designs in the iconic orange, green and red colors that 7-Eleven fans and skaters alike are going to love."

The 7-Eleven/Freshgoods merchandise will be sold exclusively on the designer's website, joefreshgoods.com. Prices for the pieces range from $10 to $90. Information on how to gain early access is available here.

Taking Brainfreeze SZN to the Streets

In addition to the launch of the Freshgoods merchandise collaboration, 7-Eleven will celebrate Brainfreeze SZN with a number of initiatives geared toward skaters and 7Rewards members, including:

While skateboarding has become more mainstream with its own professional athletes, video games and sponsors, it still retains its alternative, nonconformist attitude, according to 7-Eleven. Approximately 6.5 million people in the U.S. participate in skateboarding, with millennials and Gen Z fueling passion for the sport.

With the 7NOW delivery app, skaters never have to leave the local meet-up, park or boardwalk to order their favorite 7-Eleven snack or Slurpee. Offered in more 1,300 U.S. cities, the 7NOW app uses Pins to locate customers and offers real-time tracking that lets them know when to expect their orders, typically in 30 minutes or less. The 7NOW app is available on Google Play, the App Store or 7NOW.com.

Brainfreeze SZN comes on the heels of the debut of "Take it to Eleven," 7-Eleven's new full-funnel integrated campaign that embraces an attitude that makes a big deal out of even the smallest of things. It is set against the backdrop of a 7-Eleven parking lot — a stage where everyone and every subculture is always welcome to be themselves, according to the convenience retailer, as Convenience Store News previously reported.

Based in Irving, 7-Eleven operates, franchises and/or licenses more than 73,000 stores in 16 countries and regions, including 12,000 in North America.