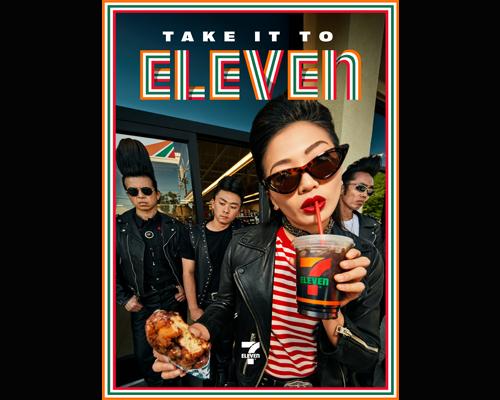 IRVING, Texas — 7-Eleven Inc. is introducing a new brand tagline, "Take it to Eleven," born of the notion that the convenience store retailer has always been a brand with customer-obsession at its core.

The Irving-based operator more than doubled its marketing investment in 2021, following a period where happiness among Americans reached a 50-year low, according to a study from the University of Chicago. As the pandemic attracted customers to the c-store category, 7-Eleven commissioned extensive research that revealed that consumers saw the brand as the "ingenious accomplice" amid the unpredictability of life.

Developed with the brand's creative and media agency 360i, "Take it to Eleven" is a new full-funnel integrated campaign that embraces an attitude that makes a big deal out of even the smallest of things. Full of youthful energy and zeal, the campaign is set against the backdrop of a 7-Eleven parking lot — a stage where everyone and every subculture is always welcome to be themselves, according to the convenience retailer.

A towering man on roller skates casually glides into his local 7-Eleven to snag a Slurpee, barely pausing as he taps his credit card to pay and rolls out the door. The thrill of that first icy sip sets off an unexpected display of agility, and the parking lot becomes the stage for his joyful skating performance.

Some people love rock and roll culture and dancing — but not everyone "Takes it to Eleven" like the group of rockabilly enthusiasts featured in "Pompadours." Stopping by 7-Eleven to grab a coffee becomes an experience of self-expression, as a leather-clad customer with a perfectly coiffed pompadour selects from 7-Eleven’s 3,000-plus coffee options to make his own unique blend before joining his friends for a spontaneous parking lot dance party.

A young woman fills up a refreshing Big Gulp before striding out to the parking lot, where she joins a group of fellow females astride impressive low-rider bikes, their cup holders displaying a variety of drink selections. The bikers begin rolling through the 7-Eleven gas station parking lot en masse, doing tricks and popping wheelies before they head into the night.

Irving-based 7-Eleven operates, franchises and/or licenses more than 72,800 stores in 17 countries, including 12,000 in North America.