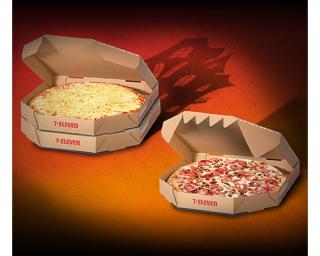 7Rewards loyalty members can pick up any large hot or ready-to-bake pizza, including cheese, pepperoni and 7-Meat varieties, at participating 7-Eleven stores nationwide and get a second large pizza for just $1.

Customers can also order a large hot or ready-to-bake pizza through the 7NOW delivery app for $3.

"7-Eleven is excited to treat customers to two frighteningly good pizza deals that, like magic, can appear wherever needed, whether that be in-store or through delivery," said Amber Langston, 7-Eleven product director of pizza. "Halloween is one of the most fun days of the year for kids, one of the busiest for parents, and one of the largest pizza consumption days of the year. 7-Eleven wants to make things simpler with these pizza deals, saving customers time and money — whether they stop into a local store or order delivery for at-home gatherings."

Irving-based 7-Eleven operates, franchises and/or licenses more than 77,000 stores in 19 countries and regions, including 16,000 in North America.