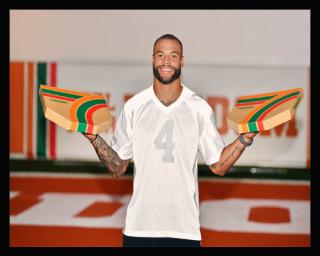 IRVING, Texas — 7-Eleven Inc. is introducing a draft of its own as the football season commences.

The convenience store operator is drafting three social media-savvy customers to join its squad of football superfans and show their followers and the world how 7-Eleven helps fuel their fandom.

Led by Dallas Cowboys quarterback Dak Prescott, pro football wide receiver JuJu Smith-Schuster, and sportscaster Erin Andrews, the 7-Eleven Superfan Influencer Team will "Take it to Eleven" all season long as they cheer on their favorite teams, the company announced.

Here's how the contest works:

"This football season, we want to showcase all the ways 7-Eleven celebrates football fans, including gearing them up with their favorite gameday drinks, snacks and essentials — in-store or for delivery," said 7-Eleven Senior Vice President and Chief Marketing Officer Marissa Jarratt. "The Superfan Influencer Team draft will help us unleash the awesome in our customers by allowing them to express their creativity and passion for football and the 7-Eleven brand. And who wouldn't want to be on a team with Dak, JuJu and Erin?"

Separate from entering the social contest, customers who may not be expert content creators can still win a spot on the 7-Eleven Superfan Influencer team through the Fuel Your Fandom Sweepstakes. Starting Aug. 25 and running through the end of the year, customers can scan the 7-Eleven app when they buy select items in-store or for delivery, including 7-Eleven hot foods, Tostitos, Red Bull, Lay's, Snickers, Jack Links, Pepsi, Cheez-Its, Lucky Charms, Dr Pepper, and other specially marked products.

The 7-Eleven app can be downloaded from the App Store, Google Play or by visiting 7Rewards.com.

7-Eleven operates, franchises and/or licenses more than 77,000 stores in 16 countries and regions, including nearly 16,000 in North America. It operates Speedway, Stripes, Laredo Taco Co., and Raise the Roost Chicken and Biscuits locations.