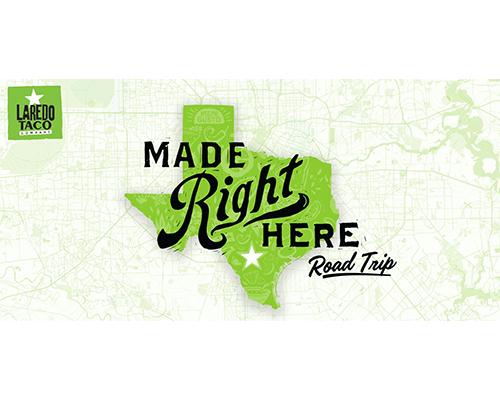 IRVING, Texas — 7-Eleven Inc.'s Laredo Taco Co. is launching the "Made Right Here Road Trip," a six-part video series hosted by Mando Rayo of United Tacos of America and is available on the Laredo Taco website and social media channels.

The series trailer was released Sept. 28 to celebrate Hispanic Heritage Month and the first episode will be released on Oct. 5 to celebrate National Taco Day.

Rayo, a taco journalist, author and native of Texas, will take viewers on a Texas-sized taco tour, taste testing his way through his personal favorite Laredo Taco Co. fare in some of the Lone Star State's most iconic cities. Throughout the video series, Rayo and local city advocates and personalities discuss Hispanic culture influences and heritage, including local businesses, food, music and art, while showcasing the rich history between Texas and Mexico.

"It's a real honor to have your culture represented in the 'Made Right Here Road Trip' series," said Rayo. "We connect with Latinos across Texas and give them the opportunity to share their own stories in their own ways. We also highlight my personal favorites from Laredo Taco Co. You're sure to be craving breakfast tacos or carnitas by the end of each episode."

Laredo Taco Co. will release a new episode every "Taco Tuesday" throughout the month of October and into November. Featured cities will include Laredo, Corpus Christi, Houston, Brownsville, San Antonio and Dallas.

"The 'Made Right Here' series is a collaboration highlighting customers, team members and, most importantly, the communities where we live and work," said Brad Williams, 7-Eleven senior vice president of corporate operations and restaurant platforms. "We begin everything with our customers in mind, and they inspire us every day. At Laredo Taco Co., we respect the taco and authentic Mexican recipes and flavors, representing generations of Hispanic traditions and culture."

Laredo Taco Co. will host a screening and viewing party of the "Made Right Here Road Trip" series in select cities throughout October. The first scheduled outdoor event will be held in Laredo at Average Joes Bar from 7 p.m. to 9 p.m. on Oct. 5. Rayo and Sammy "The House" Ramirez, on-air personality and Laredoan, will be onsite for a special meet and greet.

Each event is free to the public and will offer free Laredo Taco Co. tacos, free raffle tickets and door prizes.

Headquartered in Irving, 7-Eleven operates, franchises and/or licenses more than 77,000 stores in 17 countries and regions, including nearly 16,000 in North America.