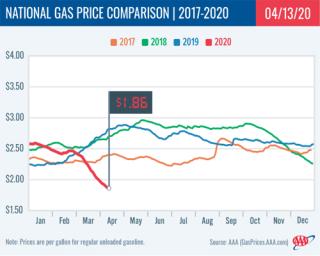 NATIONAL REPORT — With more directives from the government to stay home, U.S. gas demand is experiencing "fast and furious destruction," according to a new report from AAA.

The national gas price average has steadily declined for seven weeks, pushing the average cheaper by 61 cents to $1.86 today. This rate is 6 cents less than last week, 44 cents cheaper than a month ago and nearly $1 less than a year ago.

"We are seeing fast and furious gasoline demand destruction. The latest data reveals demand levels not seen since spring of 1968," said Jeanette Casselano, AAA spokesperson. "Every U.S. region is seeing builds in gasoline inventories and crude storage, which is just driving pump prices even cheaper."

Nationwide, the states with the top 10 largest weekly decreases are:

Additionally, the states with the top 10 least expensive markets are:

Motorists in Michigan and Minnesota are seeing significant savings at the pump on the week, month and year. Both states land on the respective top 10 lists for biggest changes in the country:

With this week's pump price declines, Illinois is in the only state in the region with an average more than $1.75 per gallon at $1.88. Overall, Wisconsin ($1.30) carries the cheapest average in the region and country.

Florida is the only South and Southeast state with an overage more than $1.75 per gallon at $1.84. Oklahoma, Arkansas and Mississippi carry the cheapest averages in the region at $1.40, $1.53 and $1.57, respectively, and land on the top 10 list of states with the lowest averages. On the week, states in the region saw pump price declines from 8 to 11 cents.

Compared to a year ago, motorists in the South and Southeast are seeing significant savings — some pennies away from or more than $1 per gallon: Oklahoma (down $1.20), Arkansas (98 cents), Texas (97 cents), Tennessee (97 cents) and Georgia (97 cents).

Mid-Atlantic and Northeast states are seeing gas prices decrease, but at a slower rate as compared to neighbors in the South and Mid-West. On the week, the states that saw the largest declines in the region are Washington, D.C (8 cents), Vermont (6 cents), Connecticut (6 cents), Rhode Island (6 cents) and West Virginia (6 cents). Gas prices now range from as cheap as $1.71 in North Carolina to as expensive as $2.25 in New York.

On the month, motorists in the Mid-Atlantic and Northeast states are seeing a savings at the pump between 27 to 49 cents. Vermont and Maine have the largest month-over-month difference at 49 cents and 45 cents, respectively.

Three states in the Rockies region now have averages less than $2 per gallon: Wyoming ($1.98), Montana ($1.90) and Colorado ($1.85). With a 17-cent decrease on the week, Idaho ($2.02) is close to joining the sub-par $2 per gallon list. The state also saw the largest decrease in the region and the second largest in the country.

Motorists in Utah ($2.17) are seeing gas prices decline, just not as fast as neighboring states.