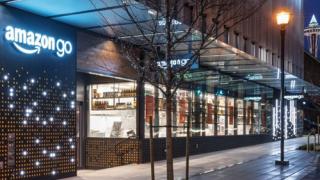 SEATTLE — It may have only four Amazon Go locations under its belt at the moment, but Amazon could do to brick-and-mortar retail what it did to e-commerce: dominate.

According to a report by Bloomberg, the Seattle-based company is eyeing the possibility of opening as many as 3,000 Amazon Go stores, its cashierless retail concept.

People familiar with Amazon's plans told the news outlet the expansion could roll out over the next few years, putting the company on a path to rival and threaten traditional retail chains, like c-store giant 7-Eleven Inc. and quick-service restaurants like Subway and Panera Bread — not to mention local mom-and-pop businesses.

Specifically, the company is considering plans to have about 10 locations open by the end of this year; about 50 locations in major metropolitan areas in 2019; and as many as 3,000 by 2021.

Opening multiple locations in proximity, like it's doing in Seattle, could also help Amazon reduce costs by centralizing food production in one kitchen serving many stores, Bloomberg said.

CEO Jeff Bezos sees eliminating meal-time logjams in busy cities as the best way for Amazon to reinvent the brick-and-mortar shopping experience, where most spending still occurs, according to Bloomberg.

However, Bezos is still testing the best format. Will it be a c-store with a fresh food program and a limited grocery offering, or fast pick-up food concept similar to Pret a Manger, a source said.

On Sept. 17, Amazon opened its fourth Amazon Go location, this time in Chicago. The other stores are in Amazon's hometown, Seattle. The first opened in January near the company's headquarters.

As Bloomberg noted, two of the Amazon Go stores offer only a limited selection of salads, sandwiches and snacks, showing that Amazon is experimenting with the concept simply as a meal-on-the-run option.

Two other stores, including the inaugural store, also have a small selection of groceries, similar to a convenience stores.

Cost could be an obstacle. The first Amazon Go required more than $1 million in hardware. A prepared-food focus would reduce upfront costs of opening each location because it would require fewer cameras and sensors.