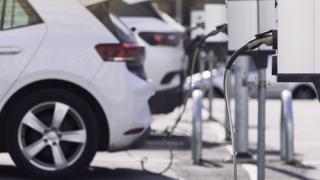 WASHINGTON, D.C. — The Biden Administration has set a goal to create a national network of 500,000 electric vehicle (EV) chargers by 2030.

The proposed rule would establish the groundwork for states to build federally funded charging station projects across a national EV charging network, an important step towards making electric vehicle charging accessible to all Americans. The minimum standards will ensure a unified network of chargers with similar payment systems, pricing information, and charging speeds, according to the Department of Transportation (DOT).

The standards also establish strong workforce requirements for installation, maintenance and operations to increase the safety and reliability of charging station function and use, and create and support good-paying, highly skilled jobs in communities across the United States.

The proposed rule is expected to publish in the Federal Register the week of June 13. A signed copy of the document submitted to the Federal Register for publication is available on FHWA's website.  A final rule may be published after FHWA has had the opportunity to review the comments submitted.

Earlier this year, the U.S. Department of Energy (DOE) and the DOT announced that $5 billion will be made available under the new NEVI Formula Program, established by President Biden's Bipartisan Infrastructure Law, to build out a national EV charging network, as Convenience Store News reported in February.

"To support the transition to electric vehicles, we must build a national charging network that makes finding a charge as easy as filling up at a gas station," said U.S. Transportation Secretary Pete Buttigieg. "These new ground rules will help create a network of EV chargers across the country that are convenient, affordable, reliable and accessible for all Americans."

According to the DOT, the proposed requirements will help states as they develop their EV deployment plans in concert with the Joint Office of Energy and Transportation, which was established by the Bipartisan Infrastructure Law and is providing direct technical assistance and support to help states with the $5-billion NEVI program.

"We're tackling range anxiety and vehicle charging deserts by making sure that charging stations are easily and equally accessible, allowing every American can get coast to coast in an electric vehicle," said U.S. Secretary of Energy Jennifer M. Granholm. "The investments made possible by the Bipartisan Infrastructure Law will not only build an interconnected national charging network, but also boost local economies and strengthen our independence from the volatilities of fossil fuels."

Additionally, DOE, in coordination with DOT through the Joint Office of Energy and Transportation, has established an advisory group to make recommendations regarding the development, adoption and integration of electric vehicles into America's transportation and energy systems.