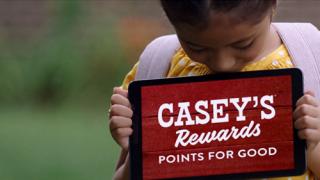 ANKENY, Iowa — Although convenience stores have remained open during the COVID-19 health crisis, retailers are seeing the impact of consumer-behavior changes throughout all areas of the store.

At Casey's General Stores Inc., President and CEO Darren Rebelez said its prepared food and fountain category has been one of the areas most impacted by the effects of the coronavirus pandemic.

During the first six weeks of its fiscal 2020 fourth quarter, excluding the extra day for Leap Year, Casey's experienced same-store sales growth of 5.5 percent. The last six weeks, however, the retailer saw a decline of approximately 30 percent, resulting in same-store sales down 13.5 percent for the quarter, Rebelez reported during the company's fourth-quarter earnings call on June 9.

Historically, whole pizza pies make up about 25 percent of Casey's prepared food and fountain category, with the remainder coming from items that are primarily self-serve and housed either in food warmers or bakery cases; or from the coffee and fountain areas, he pointed out.

"Our whole pie business as a destination item has been very resilient during this time, showing significant double-digit same-store sales gains," Rebelez noted. "In contrast, the remaining 75 percent of this category is more dependent on everyday traffic that comes from people commuting to and from work, or other activities. As result, this is where we experienced the greatest adverse impact in prepared foods from the pandemic.

"Also during this time, several areas in our footprint restricted our ability for self-service food items, as well as our coffee and fountain offering. In addition to this, to protect the wellbeing of our guests, we voluntarily suspended self-service across our entire chain for a period of time," he continued.

Casey's has since resumed self-service platforms where allowed, as state and local restrictions begin to ease around the country.

"Part of being a convenience store is being able to get in and out really quickly and kind of do things for yourself," he said. "That was something that our guests did not like and we started to see that come around when we started to loosen up those restrictions, and our guests have enjoyed that again."

For the fourth quarter, total prepared food and beverage sales at Casey's decreased by 9.5 percent to $229.9 million.

Prior to the health crisis, Casey's comps were accelerating, partly driven by several digital initiatives gaining momentum. One such initiative is the retailer's new rewards program.

"We currently have over 2.2 million active members enrolled, compared to just under 1 million members five months ago when we launched the program, and this number continues to climb," Rebelez cited. "Also, approximately 50 percent of all pizza orders are conducted digitally now, and over 20 percent of all of our transactions have a rewards participant."

Total Q4 sales in Casey's grocery and other merchandise category were $568.1 million, up slightly from the fourth quarter a year ago. Same-store sales were down 2 percent during the quarter, adversely impacted by stay-at-home restrictions.

To put this in perspective, for the first six weeks of the quarter, same-store sales for this category — excluding the extra day for Leap Year — were up more than 5 percent, compared to the last six weeks where it saw a decline in comps by approximately 9 percent, according to Rebelez.

Some subcategories were more resilient, including beer, alcohol and tobacco.