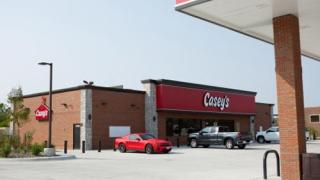 ANKENY, Iowa — As customer traffic ticks back up, Casey's General Stores Inc. reported the highest quarterly adjusted EBITDA in the company's history for the first quarter of its 2022 fiscal year.

During an earnings call on Sept. 8, Casey's President and CEO Darren Rebelez reported that the company's adjusted EBITDA was $243.2 million, and a rebound in customer traffic drove "an all-time-high gross profit dollar quarter for the company."

Looking closer at the numbers, inside same-store sales were up 8 percent for the first quarter, with an average margin of 40.5 percent.

"Grab-and-go items such as pizza slices, packaged beverages and snacks were up significantly throughout the quarter as guest traffic improved," Rebelez pointed out.

Same-store grocery and general merchandise sales were up 7 percent and the average margin was 33 percent, compared to 32.2 percent for the same period a year ago. The chief executive noted that store resets completed toward the end of its 2020 fiscal year continue to significantly benefit this category.

"Gross profit margin improved due in part to our strategic sourcing efforts from our centralized procurement team," Rebelez said. "This category also benefits from our private label effort as we exited the quarter with a 4.4-percent penetration rate for the grocery and general merchandise category."

As for same-store prepared food and dispensed beverage sales, they were up 10.8 percent and the average margin for the quarter was 61 percent, vs. 59.7 percent a year ago.

"Sales were up double digits in bakery items and dispensed beverages," he said. "Pizza slices were the star of the show, up close to 29 percent in the quarter."

Moving to the forecourt, same-store fuel gallons sold during the quarter were up 9 percent, and fuel margin was 35.1 cents per gallon.

Casey's also reported gross profit of $723.9 million for the quarter — an increase of more than $100 million from the prior year.

"This represents the highest quarterly gross profit in Casey's history. It is primarily attributable to higher inside gross profit of $66.3 million, or nearly 17 percent, as well as an increase of $24.4 million, or 11.6 percent, in fuel gross profit," Bramlage explained.

Based in Ankeny, Casey's General Stores operated 2,380 convenience stores at the end of the quarter on July 31.