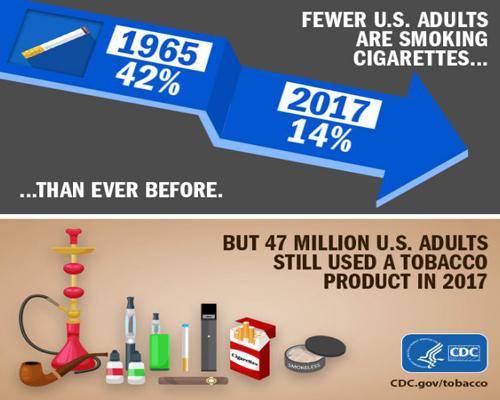 The CDC publishes tobacco data in conjunction with the Food and Drug Administration, and the National Institutes of Health's National Cancer Institute.

ATLANTA — One in five U.S. adults used a tobacco product in 2017; however, new research shows cigarette smoking reached its lowest level ever recorded among the demographic.

According to the Centers for Disease Control and Prevention (CDC), an estimated 14 percent of U.S. adults (34 million) were current — every day or some day — cigarette smokers last year — down from 15.5 in 2016. The figures represent a 67-percent decline since 1965.

The CDC published the data in conjunction with the Food and Drug Administration (FDA) and the National Institutes of Health's National Cancer Institute (NCI).

"This new all-time low in cigarette smoking among U.S. adults is a tremendous public health accomplishment — and it demonstrates the importance of continued proven strategies to reduce smoking," said CDC Director Robert Redfield. "Despite this progress, work remains to reduce the harmful health effects of tobacco use."

According to the 2017 National Health Interview Survey (NHIS), the tobacco landscape has changed in recent years to include newly developed products. In 2017, cigarettes were the most commonly used product (14 percent) among U.S. adults, followed by:

The data was released in the Morbidity and Mortality Weekly Report.

"The continued drop in adult smoking rates to historic lows is encouraging and the FDA is committed to accelerating declines in smoking and shifting the trajectory of tobacco-related disease and death through our comprehensive approach to tobacco and nicotine regulation," said FDA Commissioner Scott Gottlieb, M.D.

"We've taken new steps to ultimately render combustible cigarettes minimally or non-addictive and to advance a framework to encourage innovation of potentially less harmful products such as e-cigarettes for adults who still seek access to nicotine, as well as support the development of novel nicotine replacement drug therapies. At the same time we're also working to protect kids from the dangers of tobacco product use, including e-cigarettes," he added. 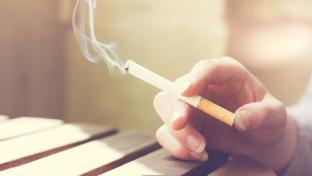 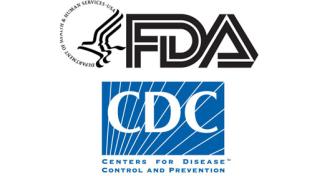