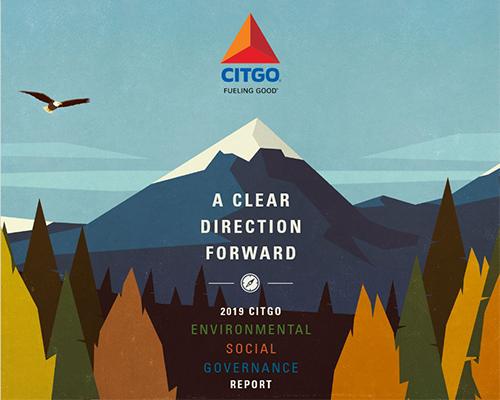 HOUSTON — For the first time ever, CITGO Petroleum Corp. released a report detailing its environment, social and governance (ESG) initiative.

Titled A Clear Direction Forward, the report represents a significant shift in CITGO's approach to corporate responsibility reporting, with an increased emphasis on ethics and governance accountability, according to the company.

"When the CITGO board of directors was appointed in 2019, one of its key objectives was to review and strengthen corporate governance," he added. "We are particularly gratified with the significant progress we've made infusing good governance practices across the company."

The report also includes CITGO's first statement addressing climate change, including support for legislation that seeks to curb greenhouses gases; and remediation and restoration of Petty's Island, N.J., a 350-acre site that was once a CITGO terminal and has been transformed into an urban wildlife preserve and destination for ecotourism and environmental education.

According to the report, steps taken to enhance corporate governance, internal controls, compliance and ethics since the 2019 appointment of a new CITGO boards of directors includes:

According to CITGO, other highlights of the report include:

"When the new board of directors and management team joined CITGO in 2019, we focused on institutionalizing best practices at CITGO and the Simon Bolivar Foundation – and elevating the importance of diversity and inclusion," said former CITGO chairwoman and current board member Luisa Palacios. "The results are evident in a more socially responsible company that strives to be an outstanding corporate citizen, prioritizes integrity and transparency and is driving progress in diversity with the appointment of multiple women to key corporate leadership roles for the first time."

The increased focus on transparency and accountability to a broad set of stakeholders is intended to be an ongoing corporate priority.

"We will continue working to protect our people, communities and our planet through actions that are guided by sound judgment and strong adherence to our corporate code of ethics – and we will transparently report our progress," said Jordá, "It's who we are."